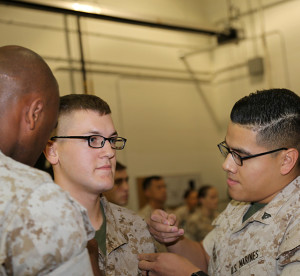 But Beasley’s story didn’t begin with his promotion, or even his enlistment into the Marine Corps. He says he’s been working on improving himself in all aspects since before he enlisted in the Marine Corps.

Weighty issue
“I remember my recruiter, Sgt. Sand, asking me how much I weighed,” Beasley said sheepishly. “It’d always been a sore spot for me, and when I told him I was 290 pounds. Sgt. Sand said he couldn’t start the process of me enlisting until I dropped some weight.”

It is every Marine’s responsibility to meet and maintain personal weight that conforms to the Marine Corps body fat composition standards. Prospective applicants must meet those requirements to enlist. For Beasley, that meant losing 100 pounds.

“I started setting goals for myself like I’m going to run this much today, I’m going to lift this much tomorrow or I’m going to lose this much weight after this amount of time,” Beasley said. “I had given myself the goal that I’d weigh 190 by the time I started my high school senior year and I took it a step further and weighed-in at 160 pounds.” 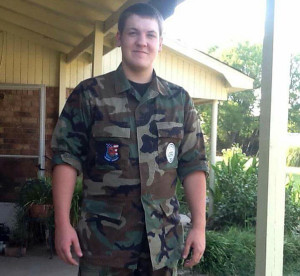 Pride in accomplishment
“After those three months of boot camp and finally getting my eagle, globe and anchor, I thought to myself, ‘I finally did it,’” he said proudly. “I had done something where it wasn’t anyone else’s abilities but my own. It was me accomplishing what I had worked so hard for.”

Beasley works as an administrative orders clerk at his current unit. He says he works hard to excel at his job as well as in his physical fitness.
“I’m proud of my accomplishments and I only hope to inspire others with my story, because if I can do it then they can too,” he said proudly.

To be promoted within the military, service members must demonstrate the ability to lead and guide others in any situation. In the Marine Corps, there’s one rank that stands apart from the rest: lance corporal. The Marine Corps is currently the only military branch with the rank and Marines are expected to show a degree of leadership and skill in serving as role models.

“It feels good knowing that I’ll be able to take what my seniors have taught me so far in my career and pass it down to my own subordinates,” Beasley said.