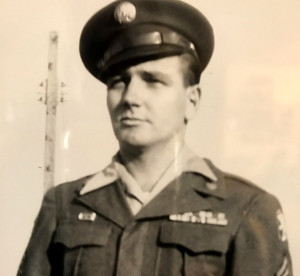 Army Staff Sgt. Daniel Stoudt poses for a photo as member of the 192nd Tank Battalion. Stoudt, later, survived the Bataan Death March during World War II. The Bataan Death March was a forced march of 76, 000 POWs including Filipino and American soldiers by Japanese forces, which began April 29, 1942.

Every man, no matter how humble, how quiet, has his breaking point–where he decides he has nothing to lose.

Daniel was at his breaking point.

He fell in love with the state as a boy. Seeing the wild mustangs run free in the Black Hills, hiking in the Badlands, watching the buffalo roam on the lowlands.

“Dad loved the west,” said Linda Frantz, one of his daughters. “He loved the outdoors and could do almost anything.”
But, never again.

All of it had been replaced by brutal guards, meager rations of rice and vegetables in a hot prison cell, the sad, depressing symphony of the moaning and coughing of the sick.

Staff Sergeant Daniel Stoudt had decided. He had nothing left to lose.

He had given up a lot.

He gave up his former life in Wisconsin when he was drafted in ’41, assigned to the U.S. Army’s 192nd Tank Battalion.

He had given up his left eye when he was wounded by melting metal while driving a tank in a battle with the Japanese in ’42.

He had lost a little piece of his soul every time he saw the dead bodies stacked like firewood along the brutal march.

He was, a POW, a survivor of the Bataan Death March, a perfect hell on Earth. It was an experience never to be equaled, nor ever to be forgotten for his next 50 years.

“He didn’t want to talk about it,” said his other daughter Alayene Patches. “Because he didn’t think anyone cared.”

But, many still care about the plight of the Bataan Death March survivors, even in 2017.

This year marked the 75th anniversary of the Bataan Death March. More than 7,200 marchers from around the country, military and civilian, came together at White Sands Missile Range in New Mexico to pay their respects. By walking (or running), 26 miles in their honor–over pavement, sand, hills and pits.

The memorial march is hard. It’s meant to be.

Despite the hardship, each participant has their own reasons why.

Those who didn’t have a choice began their march in 1942.

That’s how long and how far the 76,000 POWs, American and Filipino walked during the infamous Bataan Death March starting on the April 9, 1942.

Ten days and 66 miles–the equivalent of walking across the state of Rhode Island. Twice.

Ten days and 66 miles, blinded by sweat in their eyes, mouth chalky and parched from no water.

They cramped. They staggered. They wilted.

Expecting every step, every second to be his last, he had kept himself hydrated by keeping a pebble in his mouth, a trick he learned from Native Americans in his youth in South Dakota.

They taught him how to go without food. How to develop physical endurance. How to survive.

As a boy, he never knew one day he would be using this knowledge while walking his own Trail of Tears as a man.

They were yelled at in a language they couldn’t begin to understand, but the language of violence and torture is easily translated. 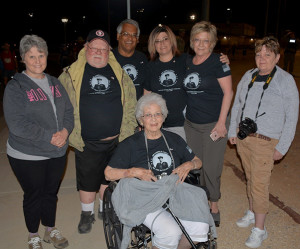 The family of Army Staff Sgt. Daniel Stoudt poses for a photo at the 75 Anniversary Bataan Memorial Death March on March 19, 2017 at White Sands Missile Range, N.M. This was the first time the family had attended the event to honor their father and grandfather. Stoudt survived the Bataan Death March and POW captivity during World War II. The Bataan Death March was a 10-day, forced march that resulted in the deaths of approximately 20,000 POWs including Filipino and American soldiers.

And those few men who reached the end, stood in defiant humiliation were the embodiment of manhood, worn and famished but still standing–unconquered.

Daniel Stoudt was among those standing.

After surviving the nightmarish march, beaten, half-starved, and humiliated beyond anything he could imagine.

But, his suffering continued.

And it seemed endless.

He agonized over seeing friends and comrades murdered.

He drowned in the smell of human waste.

His lower jaw deteriorated from scurvy.

The increased pain in his eye, and the backbreaking work in the mines.

All of these things could be tolerated, barely.

Yet it was this Japanese prison guard, in the mines, who seemed like it was his life’s mission to make his life even more of a living hell.

The physical cruelty could be dealt with, maybe even ignored. But the treatment of him, and his comrades as slaves, with no rights and no honor?

It was the last straw.

Daniel didn’t care anymore. He had made up his mind. He was going to kill the guard.

He knew if he did kill the guard, then he would be killed, probably right where he stood, only he didn’t give a damn.

He was fine with the stakes.

He had had enough.

He was a man with nothing to lose. “He had it all planned out,” said Linda. “My father, you can’t make him mad. Nothing bothers him, but he made a plan to kill that guard.”

But, fate dealt a card from the bottom of the deck, or maybe it was from the top.

“The morning he was going to do it, when he got there, there was a new guard there,” said Frantz. “And, he was nice. So he didn’t have to do it.”

One crisis was averted, yet another still remained.

But, fate had another ace up its sleeve.

The days ran into each other. Weeks turned into months.

The depression deepened, until it turned into despair.

His anger now gave way to sadness, now given into acceptance.

Miracles come in all shapes and sizes. And this miracle, contained within a small envelop mailed with a three cent stamp, gave Daniel something that was priceless.

But, what was written by his sister, Dorothy, gave him hope and forged a fire inside him to keep fighting.

While the original is lost to time, Daniel never forgot its message.

And that message lives on in the hearts of his children and grandchildren.

“He never really spoke about it,” said Linda. “Just to say that receiving that letter after so much time of no communication reminded him that there was still family at home, that were praying for him and waiting for him to return. That letter saved his life,” said his nephew, Jeff Carroll. “Just getting that letter was enough to help him through.”

The Japanese had kept his body imprisoned.

Despair and depression had kept his mind and soul imprisoned.

Dorothy’s letter had set at least two parts of him free.

He persevered, keeping himself going by the thoughts of seeing his family again. He even made plans for a gas station and restaurant.

He kept himself going spiritually. There was this one passage from the Bible he liked to recite, Psalm 23.

“Yea, though I walk through the valley of the shadow of death, I will fear no evil: for thou art with me…”

Daniel had walked through his valley of the shadow of death, and survived.

He was honorably discharged in 1946, married the lovely Charmaine Landis in 1947. Together they had four children; Daniel, Linda, Steven and Alayene.

He opened his gas station and restaurant in 1947–Danny’s Snack Shack.

The war was over.

He had survived one of the worst cataclysms in human history. Came home, started a family, created a business–the American Dream.
But, Daniel Stoudt still had more battles to fight, each night when he lay down to sleep.

“Growing up, he never wanted to talk about it,” said Linda. “He had tons of books. I read every single one of them, I would ask him questions, and I would get one sentence answers.”

His wife, Charmaine knew something was wrong. Whether it was a thousand-yard stare, the tossing and turning at night, or the prolonged silences, she was very worried.

She confided in one of Daniel’s friends, Bud Bankes, who finally convinced her husband to start attending reunions.
“And it was a life saver,” Linda said. “He opened up to his fellow comrades, and he went every year–even went back to the Philippines.”

Twenty-four years later, it’s 5 a.m. at White Sands Missile Range. It’s a mild morning and most of the marchers have made their way to the starting area for the opening ceremony.

Among those who are honoring the brave men were 14 people who have never been to a Bataan Memorial.

They are the family of Daniel Stoudt.

Like so many who experience it for the first time, they are awestruck by the size of the crowd.

“I’m thankful to be here, says Betty Stoudt, Daniel’s sister. “I wish he could be here.”

The night before, while the family was having dinner, they suddenly realized about how much Dorothy’s letter had changed the course of their lives, their very existence.

One letter. One message.