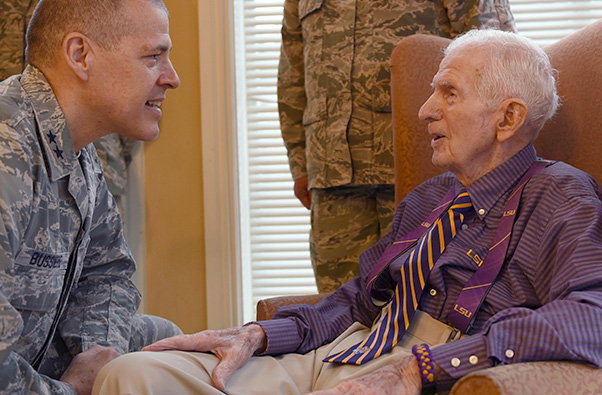 A gathering of friends, family and Mighty Eighth Airmen made way as the guest of honor slowly approached the front of the stage.

Raymond Odom, a 93-year-old World War II veteran, sat patiently in a large chair as he waited for the unveiling of a memento he lost while serving in the U.S. Army Air Forces in England more than 70 years ago.

The dog tags of the former 388th Bomb Group member were discovered in May 2016 during a metal detection hunt around the once designated property of RAF Knettishall. The tags made their journey across the pond over to Barksdale Air Force Base in Louisiana to be presented properly to the WWII and former “Mighty Eighth” veteran.

Maj. Gen. Thomas Bussiere, 8th Air Force commander, unveiled the dog tags at Arbor Rose Assisted Living Facility in Farmerville, La., Feb. 2. Odom and his wife of more than 60 years have resided at the facility for the past three-and-a-half years.

“I can’t tell you how proud we are that we are here today to present Raymond’s dog tags,” Bussiere said. “It’s a small token of appreciation for his service. We in the Eighth Air Force stand on the shoulders of giants that served before us in WWII, and I can’t tell you how much our young Airmen today appreciate what you did for our nation.”

Odom’s daughter, Debbie Ball, was one of the first people to hear the good news about the discovery of her dad’s dog tags. Ball and her family were overwhelmed with the amount of support from the local community who attended the event. 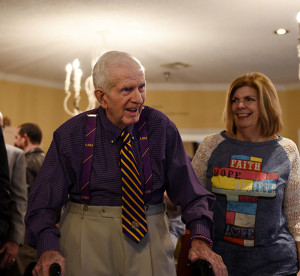 Raymond Odom, 93-year-old World War II veteran, greets friends and family during an event held at Arbor Rose Assisted Living Facility in Farmerville, La., Feb. 2, 2017. Odom served in the 8th Air Force during WWII and lost sight of his dog tags before heading back to the U.S. after the war was over. In May 2016, his dog tags were discovered in England, and sent to Louisiana where they were presented to him by the 8th Air Force commander, U.S. Air Force Maj. Gen. Thomas Bussiere.

“It was a great honor to have you all here, and it meant the world to me and my family,” she said. “I know my father was incredibly humbled and honored.”

Wyatt Lobrano, the District Director for U.S. Representative Ralph Abraham’s office, also presented an American flag to Odom, which was flown over the U.S. capitol building.

“It’s a real honor to have you people here to recognize me,” Odom said. “I feel very humbled and honored that you’re here to do this. Thank you very much!”

Although Odom no longer wears his USAAF uniform, he proudly wears his Louisiana State University gear from head-to-toe. He still wears his class ring he received upon graduation from LSU in 1948. Odom plans to hang the dog tag plaque on his wall, right next to the many other LSU trinkets that fill his room.

Raymond’s story began and ended in Louisiana, and he now spends his days with his wife, Maryann, who lives with him at Arbor Rose. Raymond will forever have a physical memory hanging near his bedside to serve as a reminder of his time serving in the Mighty Eighth. 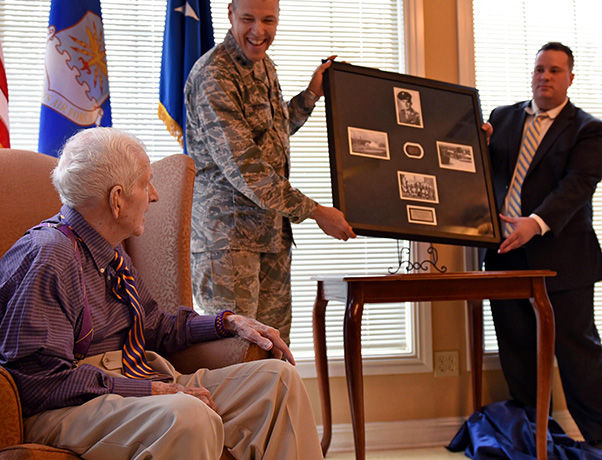 Maj. Gen. Thomas Bussiere, 8th Air Force commander, presents 93-year-old World War II veteran Raymond Odom with his dog tags at Arbor Rose Assisted Living Facility in Farmerville, La., Feb. 2, 2017. Odom was assigned to the 8th Air Force during WWII, and was presented his dog tags that were misplaced in 1945. The dog tags, found in England, made their way across the pond to Barksdale Air Force Base to be presented to Odom during an 8th Air Force 75th Anniversary official ceremony.