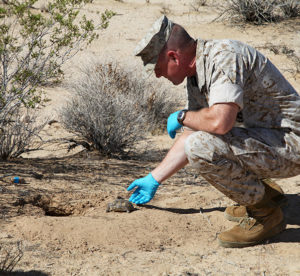 Combat Center Chief of Staff Col. James F. Harp gently sets No. 2-4, a desert tortoise hatched nine years ago at the installation’s Tortoise Research and Captive Rearing Site, next to a burrow that biologists dug for her in the desert near her old home Sept. 30, 2015. She is one of first 35 tortoises released into the wild this year.

Nine years after hatching at TRACRS, the Combat Center’s Tortoise Research and Captive Rearing Site, No. 2-4 is out on her own, finding her way in the wild.
But she isn’t alone. Biologists from the University of California, Los Angeles and the Combat Center’s Natural Resources and Environmental Affairs Division are keeping close watch on the 4 ½-inch-long desert tortoise, a bright-eyed female about the size of a medium grapefruit. Following her via a radio transmitter affixed to the front of her shell, they will watch from afar to see how well No. 2-4 settles in to her surroundings by finding a burrow where she can get out of the afternoon sun, and spend her nights underground away from predators before hibernating for the winter. Once satisfied she’s adjusting to life outside the covered 100- by 150-foot enclosure she’s called home for nearly a decade, their visits will taper off from daily, weekly and monthly checks to once a year.
During a brief ceremony attended by city, county, state and federal officials Wednesday at TRACRS, Combat Center Chief of Staff Col. James F. Harp called the joint Marine Corps/UCLA venture “a great effort in partnership.” Dr. Brian Henen, an ecologist with NREA who has been with the program since its inception, said the two entities teamed up in spring 2006 to build the six-acre facility in the Sand Hill Training Area in hopes of boosting the local tortoise population. Sand Hill, a non-live-fire area about 10 miles from Mainside, was chosen for TRACRS because it has the largest concentration of desert tortoises on the 1,100-square-mile installation. 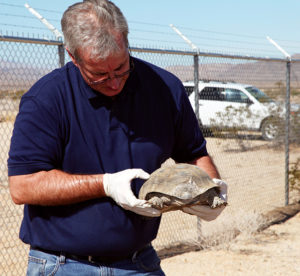 TRACRS was UCLA’s third joint venture with the Department of Defense. Earlier head-start facilities were built at the U.S. Army’s Fort Irwin National Training Center near Barstow and at Edwards Air Force Base near Lancaster. The desert tortoise is classified as a threatened species because its numbers have declined rapidly over the past few decades due to predation and upper respiratory disease. Soft shells make young tortoises particularly vulnerable to predators ranging from ants and ground squirrels to ravens and coyotes.
That first spring, biologists brought 30 wild female tortoises carrying 166 eggs to TRACRS, returning them to their home ranges after they laid their clutches in burrows at the facility. When the hatchlings began emerging in August 2006, biologists marked each one with tracking numbers. They counted 120 hatchlings in all, 114 live tortoises and six that had died, Henen said. No. 2-4 was the fourth hatchling of the second tortoise to lay her eggs at the facility.
In mid-September, biologists began releasing the largest of that first cohort of hatchlings. No. 2-4 marked the 35th and final release this year. After Harp set her gently on the ground next to a burrow biologists dug for her near a creosote bush just yards from her former home, No. 2-4 wasted no time going inside to check out what could become her new digs. She emerged a couple of minutes later, setting off across the desert at a brisk clip.
“This is either curiosity or discomfort,” UCLA research professor Dr. Ken Nagy said of No. 2-4’s walkabout. “If it’s curiosity, she will probably come back to the burrow.”
UCLA research assistant Margaret Adam aimed to find out. She spent about four hours Wednesday afternoon hovering in the background as No. 2-4 explored her surroundings, following the tortoise’s wanderings with a radio receiver that emitted a slow and steady series of “blip, blip, blip” sounds. Back at TRACRS, another 440 tortoises hatched between 2006 and 2013 remain in their pens. They’ll stay there, dining on native vegetation, until they are large enough to survive periods when food and water are scarce, and their shells are hard enough to withstand predators’ attacks.
To qualify for release, a tortoise must be at least 4 inches long. No. 4-25 and No. 24-24, a pair of active 3-year-olds that some visitors to the site Wednesday got to hold in gloved hands, illustrate just how far the youngest tortoises have to go to reach that milestone. Each is no bigger than a deck of cards. 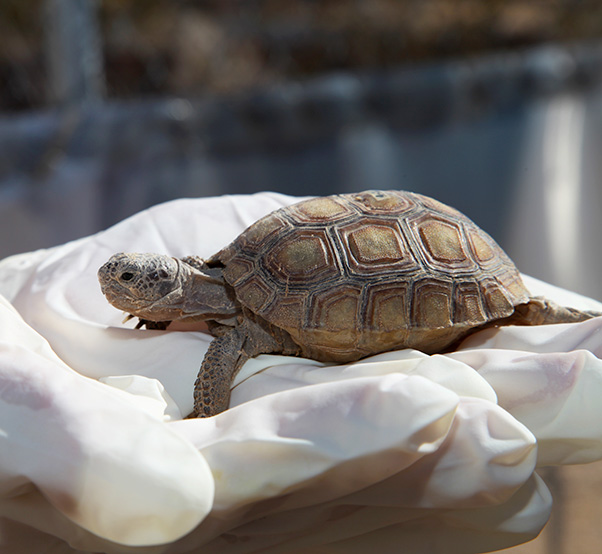 Dr. Brian Henen, an ecologist with the Combat Center’s Natural Resources and Environmental Affairs Division, counts the growth rings on CM-4, a wild male desert tortoise, that entered an open outer gate at the installation’s Tortoise Research and Captive Rearing Site on Sept. 30, 2015. Henen counted 25 rings, but estimated the tortoise is 40-years-old. The desert denizens live an estimated 80 to 100 years in the wild.

TRACRS tortoise facts
* The 35 tortoises released from TRACRS are the offspring of 14 mothers, whose home ranges are as far as 2 1/2 miles from the facility. The home range of No. 2-4’s mother encompasses TRACRS. The day before No. 2-4’s release, biologists spotted her mother mating with a wild male (CM-4) just outside TRACRS’ fenceline. Both were near the facility on release day; the male delighted visitors when he walked through an open outer gate and through the crowd as they prepared to leave.
* At age 9, No. 2-4 and the other tortoises released this fall are likely too young breed. Desert tortoises normally reach sexual maturity between the ages of 12 and 20.
* Desert tortoises lay their egg clutches in burrows. The babies’ gender is determined by egg temperature during incubation. Biologists use the phrase “hot mamas and cool daddies,” meaning eggs laid higher in a burrow will produce female hatchlings while those laid further underground will produce male hatchlings. 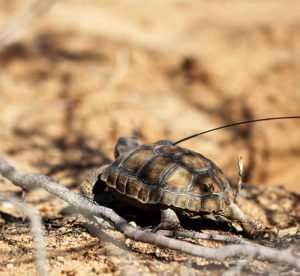 Tortoise 2-4 heads off in to the wild after being released at the Natural Resources and Environmental Affairs-hosted ceremony for the first release of tortoises from the Combat Center’s Desert Tortoise Headstart Program, September 30, 2015. NREA released 35 tortoises from the program after they spent approximately 9 years at the Tortoise Research and Captive Rearing Site. The tortoises were required to grow to a length of at least 4 inches before being released in order to assure they could better fend off predation and are equipped with a radio transmitter so that they can continue to be monitored.

The next release is scheduled for fall 2016 and others will follow over the next few years, Henen said, noting that biologists will monitor all of the released tortoises over several years to determine their survival rates. In the captive rearing site, survivorship rates have been high, ranging from 85 percent to 96 percent.
Henen and Nagy, who have worked side by side overseeing the program and monitoring the young tortoises’ progress over the past nine years, are like proud parents who just dropped off their kids at their first college dorm.
“Kind of like a parent, I’m a little worried,” Henen said. “We’re excited, but cautious.”