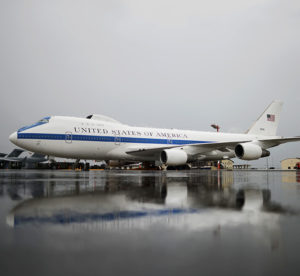 A U.S. Air Force E-4B aircraft sits on the ramp outside the 726th Air Mobility Squadron at Spangdahlem Air Base, Germany, June 4, 2014. The E-4B is an airborne platform that will host the Family of Advanced Beyond Line-of-Sight Terminals, which provide U.S. leaders with secure, survivable, satellite communications during all phases of a nuclear conflict. FAB-T entered into Milestone C Sept. 1, 2015, progressing into the production and development phase.

The Family of Advanced Beyond Line-of-Sight Terminals program here received approval to enter Low Rate Initial Production following a recent Milestone C Department of Defense acquisition board meeting.
After more than three years of developmental efforts, the program — commonly referred to as FAB-T — is poised to begin production as it enters the next phase.
“This milestone would not have been possible without the hard work, attention to detail, and laser focus on mission success from every member of our expert government and industry teams,” said Lt. Gen. Samuel Greaves, Space and Missile Systems Center commander and Air Force Program Executive Officer for Space. “FAB-T will allow seamless, uninterrupted command and control of our strategic forces in any denied-access arena.”
The $4.6 billion FAB-T program will provide U.S. leaders with secure, survivable, satellite communication during all phases of nuclear conflict. FAB-T terminals are designed to communicate with Milstar and Advanced Extremely High Frequency satellite systems via AEHF waveforms.
In addition to utilizing AEHF, the new FAB-T system comes with a distinct set of capabilities, including: Presidential national voice conferencing, integrated tactical warning attack assessment, emergency action message dissemination, satellite telemetry, tracking and control and force reportback. The system must also be able to operate through a nuclear event.
As far as improvements in capabilities, the new AEHF terminals will “significantly increase data rate transfers,” said Maj. Michael Kovalchek, FAB-T production integrated product team leader.
In June 2014 Raytheon was down-selected as the FAB-T production contractor. The production contract is valued at $298 million and will deliver 84 airborne and ground terminals. The airborne terminals are to be outfitted onto E-4B and E-6B aircraft, and the ground terminals will offer both a fixed and transportable variant for command posts.
This LRIP lot will include 10 command post terminals including four airborne terminals. By the end of the production contract, a total of 61 ground and 23 airborne FAB-T terminals will be fielded.
Now that production is beginning, the FAB-T team will be busy prepping sites for the delivery of the first 10 systems.
“Each ground site is unique,” Kovalchek said. “Each installation will have to be tailored to the individual needs of the location.”
The Air Force anticipates full operational capability by 2022.
“Achieving Milestone C is a testament to the dedication and persistence of the FAB-T team past and present,” said Col. Amanda Kato, FAB-T senior materiel leader. “This allows us to move forward into production and fielding and brings us one step closer to providing a crucial capability to the joint force.”