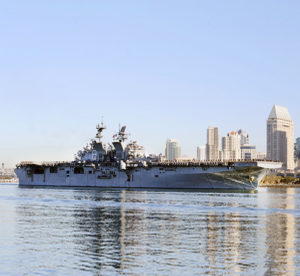 The amphibious assault ship USS Makin Island (LHD 8) returns to homeport at Naval Base San Diego following a seven-month deployment to the U.S. 5th and 7th Fleet areas of responsibility as part of the Makin Island Amphibious Ready Group.

The amphibious assault ship USS Makin Island (LHD 8) celebrated her sixth commissioning anniversary, Oct. 24.
The ship was formally commissioned in 2009 aboard Naval Air Station North Island.
Although Makin Island is the eighth and last Wasp-class amphibious assault ship, she was the first built with gas turbines and an electric drive auxiliary propulsion system.
With this unique propulsion system, the Navy expects to see fuel savings of more than $250 million over the course of the ship’s life cycle — a testament to the Navy’s commitment to energy awareness and conservation.
Makin Island embarks, transports, and deploys more than 3,500 Sailors and Marines. The ship can accommodate three landing craft air cushion, an AV-8B Harrier II aircraft squadron, and a full range of Navy and Marine Corps helicopters and amphibious vehicles, to perform sea control and limited power-projection missions.
During her first two deployments, the ship saved more than six million gallons of fuel, resulting in an estimated cost savings in excess of $22 million. She served as the platform for the first operational deployment of the four-blade AH-1Z Viper helicopter. The ship is planned to be Joint Strike Fighter capable in 2017.
Makin Island’s most recent deployment included transiting nearly 35,000 nautical miles over 115 consecutive days at-sea to conduct air strikes in the 5th Fleet area of operations. The ship participated in Exercise Red Reef 15 with Saudi Arabian forces, and performed Marine sustainment exercises in Kuwait and Djibouti.
Makin Island is named for the daring raid carried out by Marine Corps Companies Alpha and Bravo, Second Raider Battalion, on the Japanese-held Makin Island, in the Gilbert Islands, on Aug. 17-18, 1942.
The raid was launched from the submarines USS Nautilus and USS Argonaut, and succeeded in routing the enemy forces based there, gaining valuable intelligence.
Twenty-three Navy Crosses were awarded for actions during the raid, including to the raid’s leader, Marine Corps Lt. Col. Evans Carlson, and executive officer Marine Corps Maj. James Roosevelt, son of President Franklin Roosevelt. Marine Corps Sgt. Clyde Thomason was awarded the Medal of Honor posthumously for heroism during the raid and was the first enlisted Marine to be so honored during World War II.
One previous ship, a Casablanca-class escort aircraft carrier (1944-1946), has borne the name Makin Island, and received five battle stars for World War II service.
Makin Island is in the home stretch of a phased maintenance availability at Naval Base San Diego and will soon commence basic phase training in preparation for the ship’s third deployment in late 2016.