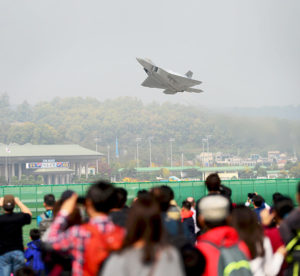 The F-22 Raptor demonstrates its unique flight capabilities for thousands of Korean civilians at the 2015 Seoul International Aerospace and Defense Exhibition held at Seoul Airport, South Korea, Oct. 24, 2015. The Seoul ADEX gives American service members a chance to showcase their outstanding aircraft and equipment to the Korean public.

Nearly 150 U.S. service members and a handful of aircraft, including an F-22 Raptor demonstration, entertained a record-breaking crowd for the 2015 Seoul International Aerospace and Defense Exhibition at the Seoul Airport Oct. 24-25.
More than 260,000 people attended the expo where they were able to interact with the service members participating in the ADEX.
Service members spent their days answering questions and posing for pictures with eager Korean locals. Senior Pacific Air Forces representatives spoke of what an incredible mission it is to be able to strengthen our relationship with Korea, its military and the local supporting communities.
“The Seoul ADEX 2015 represents a unique opportunity for citizens of the Republic of Korea to get an up-close look at some of the assets the U.S. military brings to the ROK/U.S. alliance,” said Lt. Gen. Terrence J. O’Shaughnessy, the 7th Air Force commander and U.S. Forces Korea deputy commander. “This is our very small way of saying thank you for all the generosity and support the people of Korea show our Airmen every day.”
These assets included U.S. Army and Air Force static displays including an F-16 Fighting Falcon, an A-10 Thunderbolt II, an E-3 Sentry, a C-130 Hercules, a KC-135 Stratotanker, as well as demonstration flights by the F-22 and a C-17 Globemaster III. 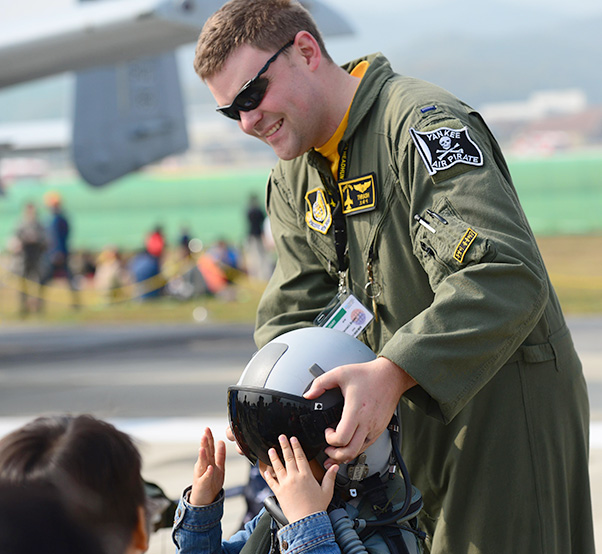 “We’re excited about the crowds, excited to be able to demonstrate the C-17 and show off a little,” said Maj. Jesse Miller, a 535th Airlift Squadron C-17 pilot from Joint Base Pearl Harbor-Hickam, Hawaii. “Specifically, we’re focusing on the high and low speed maneuverability at varying altitudes, assault landings and demonstrating how quiet the C-17 can be at high speeds. Being low to the ground gives us a tactical advantage.”
In addition to the static displays and demonstrations, the expo boasted technological exhibits from over 370 companies and 32 different countries including Israel, Australia, France, Germany, Italy, Russia, Thailand, and the United Kingdom.
“There’s a lot of really cool stuff here,” said Shari Epperson, an Aerospace Industries Association liaison. “This is a show for aerospace and defense, there’s a lot of opportunities and simulators, they’ve got all kinds of gadgets and gizmos.” 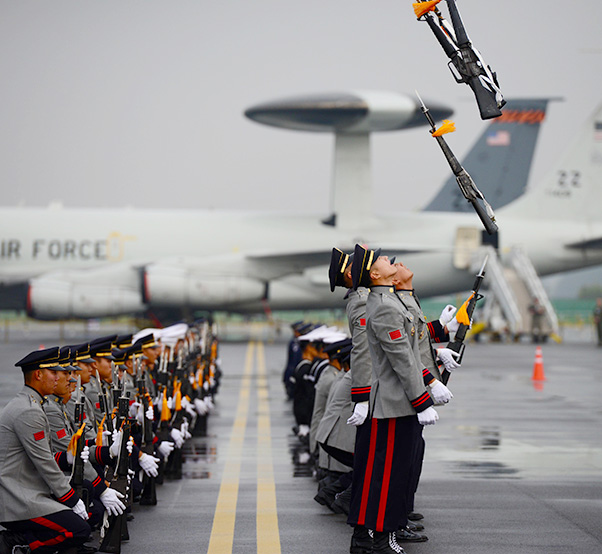 The 2015 Seoul International Aerospace and Defense Exhibition opened to the public with a colorful display of cultural history combined with regimented military drill at the Seoul Airport, South Korea, Oct. 24th, 2015. Combining the past and the present in an intricate dance of tradition and strength, the people of South Korea showcased their honored legacies to the delight of the gathered crowds.

Visitors could hop in cockpit simulators of developing helicopters and planes, try out digital shooting ranges and a few were even able to get strapped into several exo-suits on site.
“There’s a lot of interesting things being developed here that you don’t get to see every often,” said Maj. Joe Zhang, a 51st Aerospace Medicine Squadron flight doctor. “It’s kind of a good eye opener for us from the medical community, like new ground-based control stations, hanging harnesses, they even have a demonstrator model here with the latest and greatest in ergonomic seats.”
This year also marked the first time the ROK Army has been on hand to demonstrate the maneuverability and field capabilities of several different armored vehicles that have been under development.