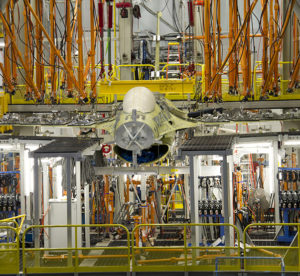 Lockheed Martin has completed more than 27,000 hours of simulated flight time on an F-16C Block 50 aircraft and is now analyzing the data to determine the durability of the aircraft beyond its original design service life of 8,000 hours.
The F-16C Block 50 was tested to 27,713 Equivalent Flight Hours during 32 rounds of comprehensive stress tests at Lockheed Martin’s Full Scale Durability Test facility in Fort Worth, Texas. The airframe was then subjected to several maximum-load conditions to demonstrate that the airframe still had sufficient strength to operate within its full operational flight envelope.
The aircraft is now in the teardown inspection and fractography phase of the test program. Test data, collected over nearly two years, will be used to identify an extended, definitive flight hour limit for the venerable F-16 Fighting Falcon and demonstrate the safety and durability of the aircraft well beyond its original design service life.
The durability test results will be used to help design and verify Service Life Extension Program (SLEP) structural modifications for post-Block 40 F-16s and to support F-16 service life certification to at least 12,000 EFH. The SLEP aims to extend the service life of up to 300 F-16C/D Block 40-52 aircraft.
The SLEP and related avionics upgrades to the Air Force’s F-16C/D fleet can safely and effectively augment the current fighter force structure as U.S. and allied combat air fleets recapitalize with F-35 Lightning IIs.
“The successful completion of this phase of full-scale durability testing demonstrates that this aircraft was built to last,” said Susan Ouzts, vice president of Lockheed Martin’s F-16 program. “This should provide even more confidence to current and potential new F-16 customers that the combat-proven F-16 will continue to play a crucial role in international security. Ongoing F-16 modernization programs, notably the F-16V, will ensure that the F-16 flies, fights and wins well into the future.”
For more than 40 years, the F-16 has proven itself as the world’s most capable 4th Generation multi-role fighter, serving as the workhorse of the fighter fleet for 28 customers around the world. The F-16V, the latest F-16 configuration, includes numerous enhancements designed to keep the F-16 at the forefront of international security. Lockheed Martin successfully completed the maiden flight of the F-16V on October 16, 2015.