Hundreds of guests visited the Antelope Valley Vietnam Veterans Memorial Wall Nov. 6-12 at Marie Kerr Park in Palmdale, with special ceremonies honoring eight military women who died in the Vietnam War.
Point Men, guardians of the wall, and other volunteers were available 24 hours a day while the AV Wall was on display.
Guest speakers Sharon Cummings, Linnie Stone and Lt. Col. Toni Flanagan shared their stories of serving in Vietnam. Cummings and Stone Cummings were “Doughnut Dollies” and volunteers for the American Red Cross.
“No, we never served doughnuts,” said Cummings, “but we did have a good time.”
The ladies helped run recreation centers, visited wounded men in hospitals and rode in helicopters and jeeps to isolated outposts.
“You know of the nurses and other woman who served in Vietnam, eight of them have their names on this wall, but there were also many civilian woman who served. There are 67 of them who also died in the war,” said Stone. 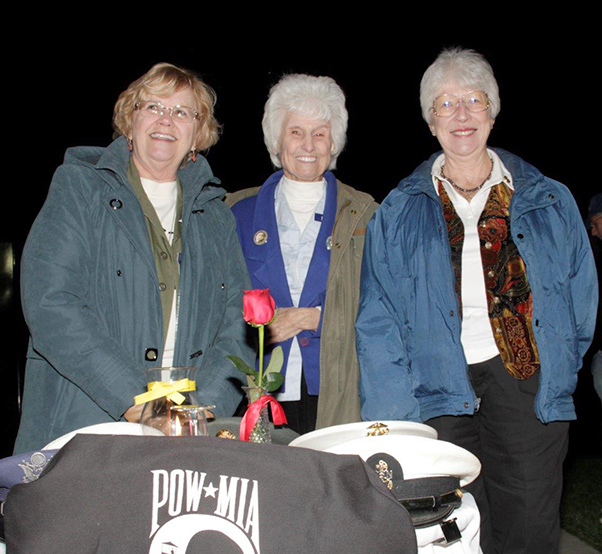 Between 1965 and 1972, 627 young women volunteered and traveled more than 27,000 miles a month, logging over 2 million miles throughout the war, reaching soldiers in isolated locations. “The mortars were always terrifying,” said Stone who survived four attacks in Vietnam.
Flanagan said people were shocked when she debarked a Gooney Bird.
“I don’t think they knew what to do with a female.” When she told people she was in Vietnam, she was a bit bothered that everyone assumed she was a nurse, until she heard of the statistics — 11,000 woman served in the Vietnam conflict. “I had no idea there were so many of us.” Flanagan served most of her career in Intelligence.
To learn more about the AV Wall, visit www.AVWall.org.