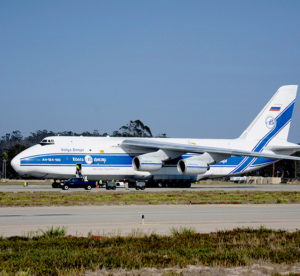 An Antonov AH-124-100 delivers rocket equipment upon its arrival at Vandenberg Air Force Base, Calif., Sept. 9, 2014. A similar aircraft — the Antonov AN-124, one of the largest cargo aircraft in the world, made its way from a production facility in Huntsville, Ala., to deliver an Atlas V booster here Nov. 20, 2015.

One of the world’s largest cargo aircraft recently delivered an Atlas V booster to Vandenberg Air Force Base, Calif.
The Antonov AN-124 made its way from a production facility in Decatur, Ala., to deliver the booster Nov. 20.
“The Antonov flew from Zurich, Switzerland, to Mansfield, Ohio, and then to Huntsville, Ala.,” said 1st Lt. Hammad Ghazali, the 4th Space Launch Squadron mission manager. “From there, the Atlas booster was loaded onto the aircraft and flown directly to Vandenberg.”
Due to the large size of rocket components, transportation can pose unique challenges. The vehicles with the transportation muscle to accomplish this task include the Antonov; the Delta Mariner, a large cargo vessel used to transport rocket components by sea; and air ride tractor trailers, which are made to handle large, fragile shipments.
The Delta IV rocket is delivered by the Delta Mariner due to its massive size inhibiting other forms of travel.
“The Atlas V and Delta IV boosters can be transported via the Delta Mariner,” Ghazali said. “This large ship is capable of carrying up to three boosters from the production site in Alabama to either Cape Canaveral Air Force Station or Vandenberg.”
Various personnel were on hand to carefully orchestrate and coordinate the successful arrival and unique transportation of the rocket booster.
“An operation of this magnitude requires extensive training, coordination and teamwork,” said Lt. Col. Eric Zarybnisky, the 4th SLS commander. “Members across Team Vandenberg, along with United Launch Alliance and other mission partners, helped make it all happen.”
Despite arriving via flight to Vandenberg, the booster’s original transportation method involved another option.
“The Atlas booster was originally built in Denver, Colo., before production moved to Decatur, Ala.,” Ghazali said. “Getting the first stage from Denver to Vandenberg wasn’t feasible via truck so the booster was designed to be flown to the launch location. Flying the booster to the launch location minimizes the transport time and avoids hazards that the booster structure would be exposed to over land.”
Consisting of a multitude of features, the Atlas booster is a pivotal piece of the space mission.
“The Atlas V booster provides space lift for critical spacecraft, including defense satellites, NASA scientific missions, and commercial satellites,” Zarybnisky said. “The boosters carry the bulk of the fuel required to produce the thrust necessary to launch these satellites into the desired orbits. The orbits we launch to, from Vandenberg, are unique and provide our launch customers the ability to perform missions they could not accomplish if they launched from Cape Canaveral.”
With the booster’s successful arrival, day-to-day launch operations remain intact — ensuring mission success at Vandenberg.
“Launch vehicle processing has very tight timelines,” Zarybnisky said. “Delays in a single operation can have large ripple effects across the process. By ensuring a smooth delivery, we can prevent schedule compression that induces additional risk into launch vehicle processing.”