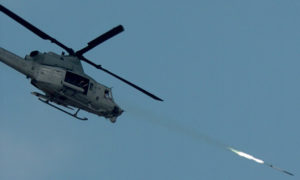 The Navy and industry partner BAE Systems recently shipped 110 Advanced Precision Kill Weapons System units to Jordan for integration on its CASA CN-235 light gunship aircraft.
Jordan is the first international partner to receive APKWS, a laser-guided rocket that can destroy targets while limiting collateral damage in close combat.
“APKWS is a versatile, reliable and effective weapon that will enhance Jordan’s warfighting capability in the Middle East region,” said Capt. Al Mousseau, Direct and Time Sensitive Strike program manager (PMA-242). “We worked closely with BAE to deliver a strong military capability to our international partner.”
APKWS fills the gap between the Hellfire missile and unguided rockets. This rocket is one-third of the cost and weight of the existing inventory of laser-guided weapons, and is the only Department of Defense fully qualified guided 2.75 inch rocket that uses semi-active laser guidance technology to strike soft and lightly armored targets in built-up and confined areas.
Since 2012, APKWS has primarily been used on the Marine Corps AH-1 and UH-1 platforms. In 2014 the Navy declared early operational capability for the MH-60S fleet and followed up in 2015 with the MH-60R fleet. Recently, the Army acquired an initial quantity of APKWS for their Apache helicopter in support of current overseas operations. APKWS has also been tested on fixed-wing aircraft.   The Marine Corps has begun activities to integrate on the AV-8B, while the Air Force is pursuing integration for their A-10 and F-16 platforms.
“It’s great to see other services are leveraging this mature program of record rather than creating redundant programs and capabilities,” Mousseau said. “There is a clear demand for this product that is growing every day, particularly with our international customers.” 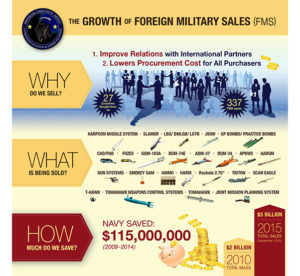 The program office has received 13 formal letters of request from international customers expressing interest in acquiring APKWS.  Eighteen months ago, there was only one international request from Jordan. In the last year, the Navy signed FMS cases with Iraq and the Netherlands and the U.S Army Security Assistance Command signed a case with Tunisia.
“Foreign military sales not only improve our relations with international partners, but they also are a huge cost savings for the department of defense since they lower the procurement costs for all purchasers,” said Mike Sears, international program lead for PEO.
From 2009-2014, PEO saved nearly $115 million through FMS weapons sales, Sears said. The Harpoon program, the largest foreign military sales weapons program, realized cost savings of more than $75 million during that time period, he said. With growing interest in programs, like APKWS, he anticipates savings will continue to increase.