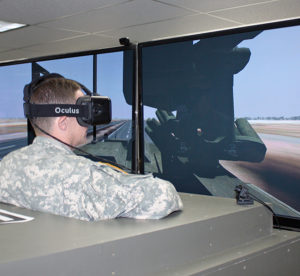 A team of soldiers and civilians is hammering plywood together and adding off-the-shelf electronics to demonstrate ideas for a new generation of Army training capabilities.
The Combined Arms Center-Training Innovation Facility, or CAC-TIF, last year began its mission of assisting the Army in generating ideas for enhanced training with low-cost solutions.
“The CAC-TIF is a living laboratory for the field and tactical formations,” said Brig. Gen. Mark J. O’Neil, deputy commanding general of the Combined Arms Center – Training. “We want to work with the force to find ways to fill training gaps. Through collaborative efforts, we will save time and money in developing the new training capabilities.”
Besides working with the force, the CAC-TIF team will collaborate with the Program Executive Office for Simulation, Training and Instrumentation, which develops, acquires and sustains simulators for training.
The CAC-TIF’s work on the Stryker Virtual Collective Trainer concept exemplifies how the facility is taking requests from the field.
In 2013, Lt. Gen. Robert B. Brown, then commanding general of I Corps, wanted a Stryker training simulator, but not at the cost of simulators that replicate the Abrams, Bradley and other vehicles. CAC-TIF developers used commercially available virtual reality headsets to create a 360-degree immersive environment and opted for touch screens instead of a number of buttons. Rather than creating an expensive metal platform, developers chose plywood.
“We built one vehicle interface for less than $7,000,” said Maj. Mike Stinchfield, who manages the CAC-TIF. He emphasized that the current model is for demonstration and testing — not for use by the force now.
In December, the CAC-TIF team will showcase the Stryker Virtual Collective Trainer concept at the Interservice/Industry Training, Simulation and Education Conference, and later take the demonstration to Maneuver Center of Excellence and home stations to receive Soldier feedback.
“We want to hear from soldiers to find out what works and what doesn’t work,” Stinchfield said.
The CAC-TIF is part of the U.S. Army Training and Doctrine Command, or TRADOC, Capability Manager – Virtual and Gaming, which writes requirements for training simulators and approves simulators for the field.
Getting early feedback from the force will help the Army get training products to Soldiers quicker and at lower costs, Stinchfield said.
One of the cost savers is the virtual reality headset versus the more expensive simulator’s computer screens.
“Virtual reality provides immersion and a sense of presence that is as good, if not better than the current simulators, at a fraction of the cost. The technology needs improvements, but several major companies will release retail versions in 2016 that we anticipate will be fully capable for the Stryker trainer,” he said.
The CAC-TIF, however, did not scrimp on some items. “The joystick that controls the remote weapon system in the Stryker is exactly the same as the real one,” Stinchfield said. “That form, fit and function needed to be there.”
Stinchfield’s team used the Army’s flagship gaming program, Virtual Battlespace 3, to create the simulation environment for the Stryker.
Brown, now the commanding general of the Combined Arms Center on Fort Leavenworth, recently visited the CAC-TIF. “The CAC-TIF has the potential to significantly improve readiness through home station training,” he said.
“This needs to get out and demonstrated to home stations for feedback from Stryker leaders and Soldiers,” said Brown regarding the Stryker vehicle.
The CAC-TIF team is planning several visits to Stryker locations with the demonstration.