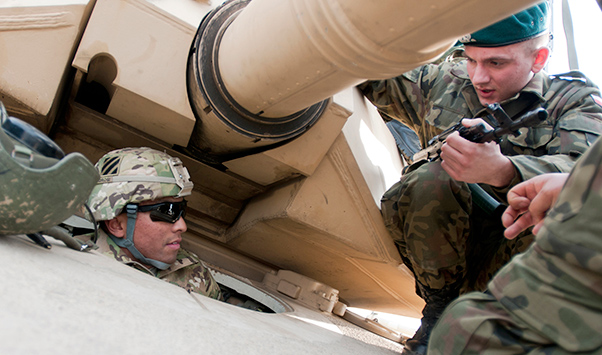 Equipment for the European Activity Set, or EAS, is scheduled to be turned in to the first forward-positioned sites beginning this week, Defense Department officials said.
About 1,400 pieces of equipment that had been used in Operation Atlantic Resolve by Europe’s Regionally Aligned Force — 1st Brigade, 3rd Infantry Division — will be turned in at sites in Bulgaria, Lithuania and Romania, officials said.
Defense Secretary Ash Carter announced during a trip to Estonia earlier this year that the United States will temporarily stage enough vehicles and associated equipment in Central and Eastern Europe to support an armored brigade combat team.
The equipment placement will allow U.S. rotational forces in the region to move more quickly and easily to participate in training and exercises, said Navy Capt. Jeff Davis, a Pentagon spokesman.
The items are part of the EAS, which includes some 12,000 pieces of equipment, including tanks, infantry fighting vehicles and artillery. The EAS equipment will be moved around the region for training and exercises as needed, Davis said.
Carter also announced earlier this year that Bulgaria, Estonia, Latvia, Lithuania, Poland and Romania agreed to host company- to battalion-sized elements of EAS equipment. Germany already hosts EAS equipment.
The gear has been and will continue to be used in support of Operation Atlantic Resolve training and exercises that demonstrate the U.S. commitment to the collective defense of NATO allies, Davis told DOD News following the briefing.
“These continuing engagements strengthen our ability to work effectively among our allies, enhance trust, and help build enduring relationships that will be the foundation for future security in the region,” he said.
Storing the U.S. equipment within allied and partner nations allows regionally-allocated forces easier access to that equipment when and where it is needed for training, which saves time, resources and potentially money, Davis said.