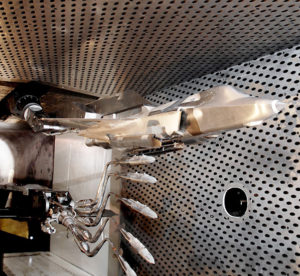 Initial weapon integration testing for the F-35 was conducted at the Arnold Engineering Development Complex. Pictured here are multiple exposures of a Guided Bomb Unit-31 Joint Direct Attack Munition, separating from the F-35 Lightning II aircraft in the 4-foot transonic wind tunnel during testing at AEDC in 2007.

ARNOLD AIR FORCE BASE, Tenn.–Testing in the aerodynamic wind tunnels at the Arnold Engineering Development Complex helped prepare the Navy variant of the F-35 Lightning II for its first external weapons release, officials said.
During a flight completed by the F-35 Integrated Task Force in September, four 500-pound Guided Bomb Unit-12 laser-guided inert bombs were successfully released from the pylons on wings of an F-35C at a Navy test range in Maryland during test runs.
The first F-35 weapon integration tests were conducted at AEDC, said Aerospace Testing Alliance senior engineer David Anderson, who added that the GBU-12 has specifically been tested on six weapon separation or Captive Trajectory Support System tests at the complex.
“These tests were conducted from the conventional takeoff and landing, short takeoff/vertical landing and carrier variant aircraft variants and obtained separation characteristics of the GBU-12, and various other weapons, from the weapon’s bay internal carriage and external wing positions,” he said.
Based on Anderson’s calculations, it’s estimated that the 1/15th scale Lockheed Martin F-35 model has been tested in a 4T wind tunnel for more than 3,300 user occupancy hours at a cost exceeding $12 million.
“I am very proud of the work that we accomplished on the F-35 program in the Tunnel 4T at AEDC,” he said. “The individual tests were long and complex, and in most cases, required the unique capabilities and expertise available only here at AEDC. I believe that through our commitment to meet the customer’s expectations, we (helped) deliver a product second to none.”
According to a statement from the aircraft’s joint program office, the recent flight “confirmed the accuracy of the predicted release trajectory.”
Last November, the Navy successfully landed F-35Cs on an aircraft carrier off the coast of San Diego, California. The service expects to declare initial operational capability in 2018.