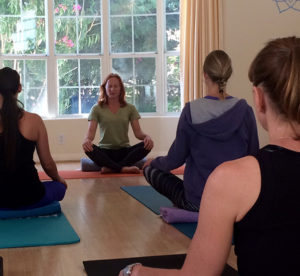 Marlies Van de Pol, a military spouse from the Netherlands, wanted to learn more about philosophy and further her career and education while her husband is stationed at Edwards AFB. She is now a certified yoga instructor for her “portable career” and encourages others to use their MyCAA for yoga or other classes.

The Military Spouse Career Advancement Accounts (MyCAA) program provides up to $4,000 (over two years) of financial assistance for military spouses who are pursuing degree programs, licenses or credentials leading to employment in “portable career fields.”
Spouses must be married to active duty service members in pay grades E-1 to E-5. Courses offered include bookkeeping, computer technician, pharmacy technician, and executive assistant.
“Most military spouses do not know about MyCAA,” explains Marlies Van de Pol, a Dutch spouse who volunteers with American and foreign spouses. “A great example where they can use this benefit is the 200-hour Yoga Teacher Training from Akasha Yoga, which is preapproved and paid for by MyCAA.”
Wanting to make the most of her time while her husband, Martin, is stationed at Edwards Air Force Base, Van de Pol was interested in furthering her education and learning more about philosophy.
“In my research of different philosophies, I discovered that yoga is the ultimate way to live your life; it is more than a philosophy. I want to grow old in a happy and healthy way and I’ve discovered yoga is the way to go.”
Van de Pol already enjoyed the ancient philosophy back in Amsterdam, but never thought of it as a career.
“A few military spouses invited me to yoga classes here and it really inspired me to learn more.”
After seeing a change in herself, she wanted to help others by becoming a certified instructor with credentials that are accepted and recognized internationally. “When we go back to the Netherlands, I want my training as an instructor to be accepted at home or wherever we are stationed around the world.” In order to accomplish this, the certification has to be recognized by the Yoga Alliance.
Determined, Van de Pol and six other friends contacted Stephanie Pafford, who has studios in San Diego. After going to a meet and greet in San Diego, the women convinced Pafford to come and teach them in the Antelope Valley.
The ladies, who are not in the American military and therefore couldn’t use MyCAA, paid $2,500 for six weekends of training and became certified to teach Vinyasa, Hatha and Gentle Flow Yoga with the breath synchronized with the movements.
“We were very fortunate that we got such personal attention in our small, private class,” says Van de Pol. Other yoga teacher training classes often have 30-40 students. Van de Pol wants to give that same personal attention to her students. She also learned to teach Restorative Yoga.
As a lead teacher from Akasha Yoga, Van de Pol will be leading the next Yoga Teacher Training together with Stephanie Pafford in Lancaster, starting in January.
While people are trying to cram more into their life, stressed out by overdoing, Van de Pol has discovered that through yoga, she has learned to live in the present, take a step back and make healthier choices.
“I still do everything I did before, but now I enjoy life more. I have more peace and am in better shape.”