When the first bombs exploded on a nearby airfield, marking the start of the Japanese sneak attack on the morning of Dec. 7, 1941, Edward Davis and others scrambled from a chow hall.
The 94-year-old Army veteran said he and other soldiers were having breakfast at Schofield Barracks, Hawaii, when Japanese aircraft dive-bombed the adjacent Wheeler Army Airfield.
“We all ran outside and looked up at the sky to see what was going on,” the retired first sergeant said before a Pearl Harbor remembrance ceremony Dec. 7 at the World War II Memorial.
At that point, a few Mitsubishi A6M Zero fighters roared over the Army base and fired at them, killing and injuring several Soldiers from his unit.
“I couldn’t believe it,” he said, recalling how the attacks stoked fears of a looming Japanese invasion. “It was an unbelievable tragedy.”
The attacks on the island of Oahu eventually left more than 2,400 dead and almost 1,200 wounded as it catapulted the U.S. into the war.
“It dealt us a body blow that I think was a rude awakening to Americans,” said Herb Durham, a former Army Air Corps pilot. “The war had started and as a young man I was eager to get in.” 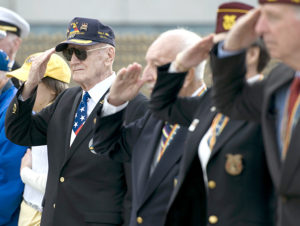 Veterans render a salute after laying wreaths during a Pearl Harbor remembrance ceremony at the National World War II Memorial on Dec. 7, 2015, in Washington, D.C.

During the war, Durham, one of about 20 World War II veterans at the ceremony, said he had some scary moments in Europe where he flew Republic P-47 Thunderbolt fighters.
One time while strafing German positions, a 20-mm round hit his canopy, causing shattered glass and shrapnel from the round to cut his face.
“I was lucky I had on my oxygen mask and goggles,” he said of the March 1945 mission. “The doctor said I was lucky I didn’t lose my left eye.”
About a month later, Durham faced his biggest test when his aircraft was shot down behind enemy lines.
“I was dive-bombing a target and when I pulled off the target I got hit in the engine,” the 91-year-old veteran recalled. “But I had a lot of air speed so I pulled up to about 6,000 feet and bailed out.”
Durham was later caught by German soldiers who threw him in a prison camp. But a few weeks later, he said, the soldiers abandoned the camp as U.S. tanks approached it, freeing him and others.
In the Pacific Theater, former Marine Cpl. Ed Graham, who joined a dozen veterans on an honor flight from Texas for the ceremony, was sent to the tense Battle of Iwo Jima.
At first, Graham, 90, said he was part of a floating reserve until the battle turned fiercer than expected and ultimately had about 26,000 American casualties including 6,800 dead.
“We weren’t supposed to go in but they tore them up so bad the first day,” he said of how the Japanese forces pinned down his fellow Marines. “It was pretty bad for the whole crew.”
Graham, assigned to the 3rd Marine Division, was later sent to the island to help purify water for combat-weary troops in the 36-day battle.
“All we had to worry about were mortars and snipers,” he said. 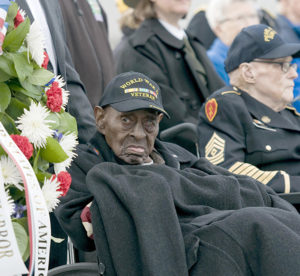 But he and other troops received some motivation when U.S. troops raised the American flag on top of Mount Suribachi, which later became an iconic image of the war.
“I was on board the ship when they raised it and everybody clapped, yelled and screamed,” he recalled. “It was quite a sight.”
The attack on Pearl Harbor and the subsequent “a date which will live in infamy” speech by President Franklin D. Roosevelt inspired many young men to sign up and fight in the costly war, which left more than 400,000 American servicemen dead and forever shaped the world.
Navy veteran Ted Waller said he rushed to the recruiter’s office following the attack.
“I went down the next day and tried to sign up but there were so many people there that they told us to go home until after Christmas so we could spend time with family,” the 92-year-old veteran recalled. “I came back the day after (Christmas) and got sworn in.”
Waller went on to take part in the world’s first all-aircraft carrier naval clash, the Battle of the Coral Sea, and roughly a dozen other battles. He then witnessed the Japanese surrender some of its South Pacific territories while on board the USS Portland at Truk, Caroline Islands, on Sept. 2, 1945 — an event often overshadowed by Japan’s surrender on the USS Missouri in Toyko Bay, Japan, that same day.
“At the time it didn’t mean anything, but now it does,” he said of the formal surrender. “It was the beginning of changes in our American life.” 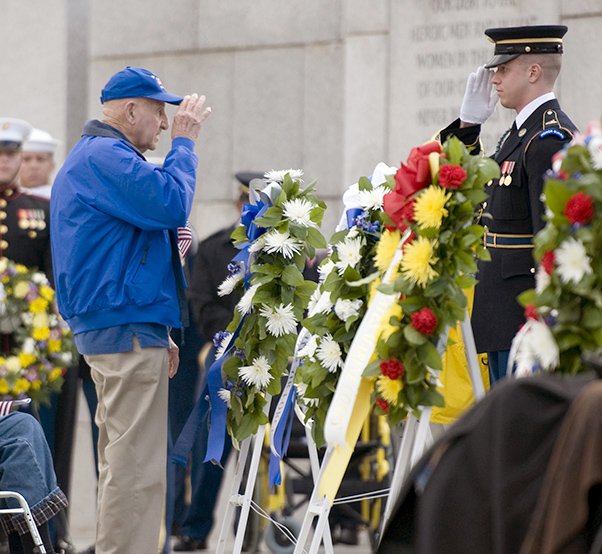 Two World War II veterans render a salute after laying a wreath during a Pearl Harbor remembrance ceremony at the National World War II Memorial on Dec. 7, 2015, in Washington, D.C. 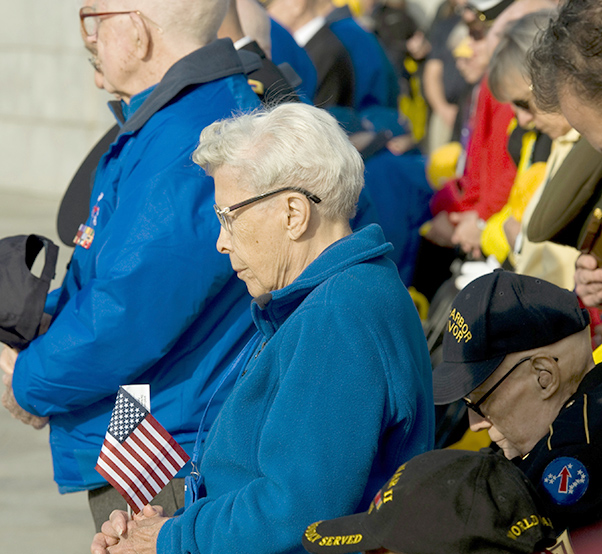 Esther Spring, who served in the Army Nurse Corps, and other World War II veterans bow their heads at the start of a Pearl Harbor remembrance ceremony at the National World War II Memorial on Dec. 7, 2015, in Washington, D.C.