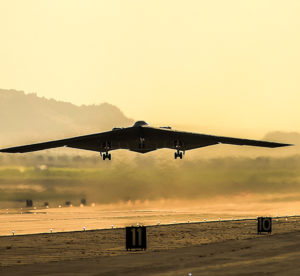 PALMDALE, Calif.–Northrop Grumman has delivered on a commitment to the U.S. Air Force to increase the availability of the B-2 stealth bomber fleet by completing a periodic “wingtip-to-wingtip” overhaul of the jet in a record 359 days.
The company returned B-2 Spirit of Kitty Hawk to the bomber’s operational home at Whiteman Air Force Base, Missouri, on Sept. 23. The shorter cycle for programmed depot maintenance, a process that has averaged more than 400 days in the past, is part of a new B-2 maintenance approach expected to save taxpayers about $900 million over the life of the fleet.
Northrop Grumman is the Air Force’s prime contractor for the B-2, the most powerful and most survivable weapon system in the nation’s long range strike arsenal.
“Our success reducing PDM flow days to less than a year stems from an aggressive, on-going effort by Northrop Grumman and the Air Force to put more B-2s on the nation’s flight line,” said Dave Mazur, vice president and B-2 program manager, Northrop Grumman Aerospace Systems. “We’ve worked closely with our customers to improve their B-2 parts acquisition process, while also reviewing critically and streamlining every aspect of our own PDM processes.”
Under a B-2 contract modification signed in April, Northrop Grumman will overhaul each jet once every nine years, versus the previous frequency of once every seven years. The company will maintain only two jets in PDM at any one time instead of the historical three and will complete PDM in an average of 365 days.
“Over the past 22 years of operation, we’ve observed that many of the B-2’s major components are holding up much better than expected,” said Mazur. “As a result, we’re able to extend its maintenance interval without jeopardizing its readiness to serve the nation’s global security interests.”
PDM includes a complete restoration of the B-2’s outer surfaces; servicing of many of its major moving parts such as landing gear, control surfaces and ejection seats; and installation of software or hardware upgrades. The process is performed at Northrop Grumman’s B-2 Depot & Modification Center in Palmdale.
The B-2 bomber is the only aircraft in the U.S. inventory that combines stealth, long range, large payload and precision weapons delivery. It can fly 6,000 nautical miles unrefueled and more than 10,000 nautical miles with just one aerial refueling, giving it the ability to reach any point on the globe within hours, and hold at risk an enemy’s most heavily defended targets.