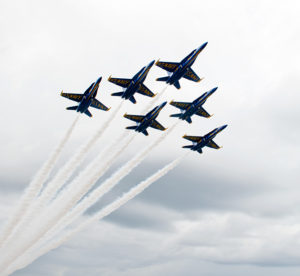 The U.S. Navy Flight Demonstration Squadron, the Blue Angels, Delta perform a Delta Flat Pass at the Jacksonville Beach Sea and Sky Spectacular Air Show. The Blue Angels are scheduled to perform 68 demonstrations at 35 locations across the United States in 2015.

The U.S. Navy Flight Demonstration Squadron, the Blue Angels, made its annual deployment to Naval Air Facility (NAF) El Centro, to prepare for the upcoming show season, Jan. 2.
“For the last 49 years, NAF El Centro and the Imperial Valley have been the winter training home of the U.S. Navy Blue Angels,” said Capt. William S. Doster, commanding officer, NAF El Centro. “Everyone is looking forward to the arrival of the new team this year and helping to celebrate their 70th anniversary.”
The 10-week winter training concludes in early March after the team completes 120 flights during a rigorous flight schedule. The weather conditions of the Imperial Valley are optimal for the amount of flights the team is required to complete.
“We are eager to begin training for our 70th season of putting on world class demonstrations,” said Lt. Ryan Chamberlain, Blue Angels lead solo pilot. “There is no better place than our second home in El Centro.”
The team performs its first public flight demonstration of 2016 at NAF El Centro, March 12.
The mission of the Blue Angels is to showcase the pride and professionalism of the U.S. Navy and Marine Corps by inspiring a culture of excellence and service to country through flight demonstrations and community outreach. In 2016, the Blue Angels will celebrate their 70th anniversary.
Visit the Blue Angels website at www.blueangels.navy.mil to view the 2016 air show season schedule, or for more information, contact the Blue Angels public affairs office at bapao@navy.mil. For more news from Navy Blue Angels, visit www.navy.mil/local/blueangels/.