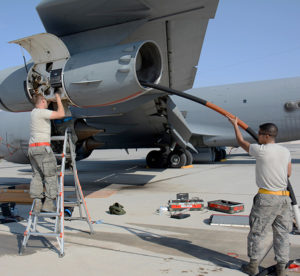 The 340th Expeditionary Aircraft Maintenance Unit at Al Udeid Air Base, Qatar, maintains the largest KC-135 Stratotanker fleet in the world of more than 40 aircraft valued at roughly $2 billion.
The unit is responsible for ensuring each aircraft is mission ready and must quickly fix any mechanical problems the planes may have. The unit has more than 350 mechanics assigned serving in a variety of specialties from hydraulics to guidance systems.
One of those mechanics, Sra. Christopher Herrera, a 340th EAMU guidance and control avionics specialist from Pensacola, Fla., said he enjoys working on the KC-135.
“Every time I fix a jet there is a sense of accomplishment,” Herrera said. “It’s a great feeling because my job makes an impact around the world. Other aircraft rely on our refuel capabilities to accomplish their mission.”
In 2015, KC-135s refueled hundreds of aircraft from 19 nations including Jordan, Australia and France as they offloaded more than 700 million pounds of fuel. The airframe is in high demand across the U.S. Central Command area of responsibility often refueling more than 90 aircraft a day.
These results are possible, in large part, because of the airmen of the 340th EAMU who often work up to 12-hour shifts repairing aircraft.
“Working 12-hour days in the heat can be grueling and physically taxing,” said SrA. Michael Charlton, a 340th EAMU KC-135 crew chief from Vancouver, Wash. “It’s worth it though because we are working on the KC-135 which impacts so many other airframes, our sister services and coalition partners.”
Capt. Kelly Womble, the 340th EAMU officer-in-charge from Cookeville, Tenn., said that without the KC-135 maintainers these aircraft wouldn’t be flying. 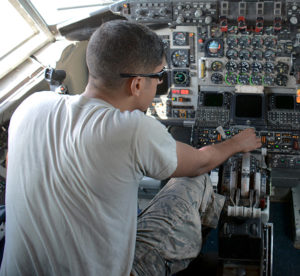 SrA. Michael Velazquez, a 340th Expeditionary Aircraft Maintenance Unit hydraulics journeyman, turns on the center wing boost pumps inside the cockpit of a KC-135 Stratotanker after installing a multi-purpose refueling system on the aircraft at Al Udeid Air Base, Qatar, Dec. 30, 2015. Velazquez and several Airmen from the 340th EAMU hydraulics team installed the system on the aircraft so the plane can refuel any airframe supporting Operation Inherent Resolve.

“It takes a lot of attention and care to keep a 60-year-old aircraft running, especially with the operations tempo and environmental conditions our maintainers have to endure,” Womble said.
The captain said her airmen give aircrews the capability to provide the fuel needed for many different types of airpower across the region.
“From bombers and fighters to ISR (intelligence, surveillance and reconnaissance) and other refuelers, across sister services and our coalition partners — we keep the mission going,” Womble said.
KC-135 maintainers perform a variety of maintenance work to keep the plane flying. Herrera shared some of his most challenging moments working on the aircraft.
“The most challenging job I had was troubleshooting a satellite triangulation switching malfunction which would not allow the aircraft to display accurate GPS data to the pilot,” Herrera said. “This was caused by a bad grounding wire for a terminal lug; it caused the jet to sense a channel malfunction and wouldn’t switch to the backup system. After 72 hours of troubleshooting we finally fixed it.”
Herrera also fixed an issue with a KC-135’s autopilot feature.
“I remember one aircraft had an autopilot failure,” Herrera said. “I fixed it, which allowed the aircraft to take-off on time. I felt a great sense of accomplishment knowing the jet would refuel fighters over Iraq and support our ground forces.”
MSgt. Benjamin McCullough, the 340th EAMU air tasking order production superintendent from Ripon, Calif., said he’s proud of his team.
“They make the mission happen day-in and day-out,” he said. “Any time something breaks we have guys out there fixing whatever may be wrong. It can get very hot on the flightline and our airmen are out there for four or five hours, sometimes longer, working on aircraft trying to get them ready for their next flight.
“Our rates for losing sorties based on maintenance not being accomplished are also incredibly low and that’s due to their diligence and hard work,” he continued. “I’m very proud of them.”