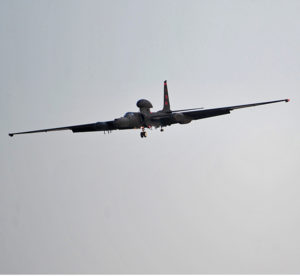 A U-2S reconnaissance aircraft comes in for a landing at an undisclosed location in Southwest Asia, Dec. 22, 2015. Upon landing, pilots must balance the aircraft’s unsupported 105-foot wingspan while bringing the aircraft to a halt.

Gliding more than 13 miles above the Earth’s surface, the U-2S reconnaissance aircraft, also nicknamed Dragon Lady, flies unnoticed and silent to all but a select few.
The U-2S is a single-seat, single-engine, high-altitude, reconnaissance, and surveillance aircraft capable of providing signals, imagery, electronic measurements, and signature intelligence to U.S. and coalition forces.
Despite the variety of manned and unmanned aircraft that have been proposed to take over the U-2S ISR role in the 60 years since its activation, it still remains a primary reconnaissance aircraft for the Air Force because of the men and women at the controls.
The preflight preparations for a U-2S pilot starts the night before with dinner and a good night’s rest.
“You don’t want go out and try something for the first time the night before a 10-hour sortie and not know how your body will react to it,” said Capt. Jacob, a 99th Expeditionary Reconnaissance Squadron U-2S pilot. “I usually wake up an hour before I have to be at the squadron to get a good a breakfast with lots of protein to fill up my stomach.”
Once at the squadron, pilots begin the process of suiting up before stepping out to fly what is known as the most difficult aircraft to land in the Air Force.
“Some days you’ll go up and she’ll be perfectly well-behaved and she’ll be just like dancing with a lady,” Jacob said. “It’s going to be smooth and everything just goes great and it’s the best flight of your life, but then there are those days when (she’s) not a lady, she is a dragon, and you’re just trying to hold on while she tries to kill you.
“A lot of it has to do with visibility,” he said.
Normally, when a pilot lands an aircraft they have what’s referred to as a “ground rush” in their peripheral vision. As they’re flying along, the ground and runway comes into their peripheral vision, signaling when they should prepare to land.
For U-2S pilots, their peripheral vision is severely limited by the full-pressure suit helmets worn during their flights. The helmet’s vision impairment is similar to a diving mask, not allowing for spotting objects to the left, right, up or down — only straight ahead.
“You can tell you’re on the runway, but you can’t tell how high off the runway you are and that’s where the mobile comes in,” Jacob said. 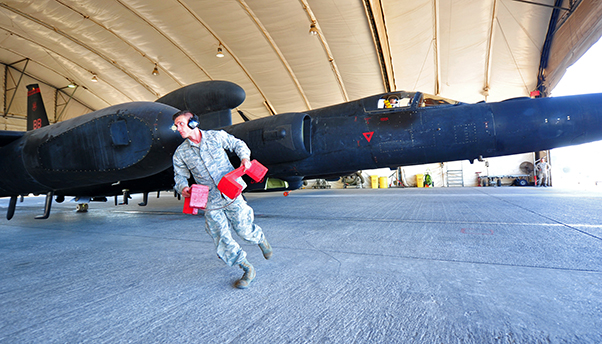 SSgt. Sigfred, a U-2S reconnaissance aircraft maintainer, removes aircraft blocks prior to the departure of a U-2S at an undisclosed location in Southwest Asia, Dec. 10, 2015. Despite the variety of manned and unmanned aircraft that have been proposed to take over the aircraft’s intelligence, surveillance and reconnaissance role in the 60 years since its activation, it still remains a primary reconnaissance aircraft for the Air Force.

Mobile chase car drivers act as a second pair of eyes and ears for U-2 pilots during their launch and landings, making up for the pilot’s limited movement and vision. Once an aircraft nears the runway, chase cars speed off in pursuit close behind it, radioing adjustments to pilot until they are inches from the ground.
“Ultimately, what we’re doing is helping the pilot land safely, which protects not only them, but the assets as well,” said Capt. Stephen, a 99th ERS operations officer and U-2S pilot. “It’s a big balance of observing what the pilot is doing and providing real-time corrections so they can land as well as they possibly can and as safe as they possibly can.”
Upon landing, pilots attempt to balance the aircraft’s 105-foot wingspan while slowing it down to a halt.
It can be difficult because the aircraft’s landing gear set is similar to a bicycle’s, with no support for its long wings, while most planes have three sets of landing gear, according to Jacob.
At any one time there are hundreds of people supporting U-2S operations, from the maintainers on the ground to the intelligence personnel who analyze the information, which is gathered and disseminated by U-2S pilots during combat sorties, Stephen said.
U-2S pilots also clarified what is the most difficult challenge they face when piloting the aircraft.
“Most people think landing the U-2 is the hardest part,” Jacob said. “It might physically be the hardest part, but the hardest part overall is really being mentally ready to fly it.”
The average length of a U-2S pilot’s combat sortie is approximately 10 hours, thousands of feet above the Earth, and with pilots unable to move more than an inch up or down in their seat, without hitting their head on the canopy.
The uncomfortable solo flights are something potential U-2S pilots must mentally be ready to encounter, Jacob said. 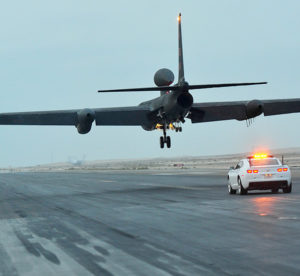 A mobile chase car driver pursues a U-2S reconnaissance aircraft during its landing at an undisclosed location in Southwest Asia, Dec. 7, 2015. Mobile chase car drivers act as a second pair of eyes and ears for U-2S pilots during their launch and landings, radioing adjustments to the aircraft to make up for the pilot’s limited sight of the runway.

“You really have to ask yourself if you’re comfortable being uncomfortable,” he said. “My advice for anyone considering becoming a U-2 pilot would be to apply and do the interview, or put yourself in a chair, stick that chair in a broom closet and turn off the lights and sit there for a couple hours. If you’re still happy, then apply.”
Despite flying solo for up to 10 hours and attempting to land, tired and hungry with limited visibility, Jacob and other pilots of the 99th ERS said they wouldn’t trade the experience for anything in the world.
“I’ve got the coolest job in the Air Force. Other people may say they have coolest job, but those people are lying,” Jacob said. “The days I’m flying, I’m the highest person on Earth other than the International Space Station, and I can see the curvature of the Earth. The days I’m not, I get to drive a chase car down the runway with no speed limit. Who has a better job than that?”

Editor’s note: Last names were removed due to security and operational concerns.