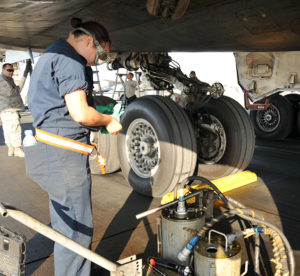 SrA. Alexis Anderson, a 379th Expeditionary Aircraft Maintenance Squadron crew chief, services oil on a B-1B Lancer during a post-flight inspection Jan. 11, 2016, at Al Udeid Air Base, Qatar. Inspections are done to every B-1 after a mission. Anderson is deployed with the 307th Expeditionary Aircraft Maintenance Unit from Ellsworth Air Force Base, S.D.

A B-1B Lancer that achieved rotational milestones is scheduled to leave Al Udeid Air Base soon for a six-month hiatus for aircraft modifications stateside.
The B-1 has been under the operational support of the 379th Expeditionary Aircraft Maintenance Squadron,and has set records during the July-January rotation with military members from the 307th Aircraft Maintenance Squadron, stationed at Ellsworth Air Force Base, S.D.
“This rotation has supported a total of 490 sorties and enabled 4,850 bombs to be dropped in six months,” said Capt. Abraham Smith, the 379th EAMXS officer in charge. “When the B-1 leaves this will be the first time since 2001 we won’t have B1s in the area of responsibility.
“Our mission has been to provide safe and reliable combat aircraft to the bomb squadron,” Smith continued. “We’ve supported more bombs dropped in one month than any other B-1 unit.”
The previous Lancer unit supported 1,068 bombs dropped in one month, while the 379th EAMXS has supported 2,224 bombs dropped, he added.
Accomplishments of this magnitude do not come easy, he said, and being able to maintain such a high operational tempo does not come without challenges.
“Hundreds of thousands of manpower hours have been put into the past six months to keep these aircraft running and it’s been a very challenging and an exhausting deployment. However, we’ve found ways to make it enjoyable,” Smith said.
He also added that getting parts for the aging aircraft is a big challenge, but he went on to say that nothing is more satisfying than when they overcome the challenges and fix it. He also said that being able to get the aircraft turned around and back in the fight in a timely manner brings a lot of satisfaction to the team.
“We try to be prepared for the unexpected, but we can never predict what is going to go wrong on the aircraft,” said Staff Sgt. Daryl Ackerman, a 379th EAMXS crew chief. “However, we combine our knowledge and resources to make sure the aircraft get fixed.”
SSgt. Matthew Kwawegen, a 379th EAMXS lead crew team chief, added, “Some challenges we faced were the weather, trying to encourage the new airmen to stay positive, making sure they pay attention to detail, and staying focused.”
In order for the B-1 to continue its daily operations there are teams of airmen that ensure the aircraft’s capabilities are mission ready.
“We train, certify and evaluate all the load crews,” Kwawegen said. “When we deploy as a unit we evaluate the load crews throughout the deployment, as well as load and do the maintenance to ensure everyone is loading safely and efficiently.”