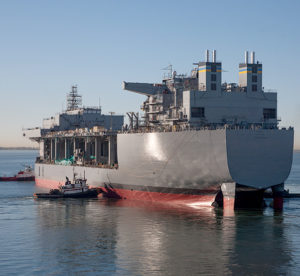 Secretary of the Navy Ray Mabus announced the Navy’s newest Expeditionary Sea Base (ESB) ship, T-ESB 4, will be named USNS Hershel “Woody” Williams during a ceremony in Charleston, W.Va., Jan. 14.
Hershel “Woody” Williams, the ship’s namesake, was born in West Virginia and joined the Marine Corps following the attack on Pearl Harbor.
In 1944, after serving in Guadalcanal and Guam, he joined the campaign in Iwo Jima. Two days after arriving on the island, Williams picked up a 70-pound
flamethrower and walked ahead of his infantry’s tanks for four hours clearing their path of enemy machine gun fire. President Harry S. Truman awarded him the Medal of Honor two years later for his actions.
Williams served during the Battle of Iwo Jima until he was wounded in March of 1945. He returned to the United States, was awarded a Purple Heart and released from active duty. Later, he served in the Marine Corps Reserves for 17 years.
Williams is the last surviving Medal of Honor recipient from the Battle of Iwo Jima.
The new 784-foot-long vessel will feature a 52,000 square foot flight deck, fuel and equipment storage, repair spaces, magazines, and mission-planning
spaces.
Able to accommodate up to 250 personnel, the new ESB ship will support multiple missions, such as air mine counter measures (AMCM), counter-piracy operations, maritime security operations, humanitarian aid and disaster-relief missions, and crisis response operations.
In addition, the vessel will be capable of supporting MH-53 and MH-60 helicopters, with an option for future upgrades to support MV-22 tilt-rotor aircraft.
USNS Hershel “Woody” Williams will be constructed by General Dynamics National Steel and Shipbuilding Company (NASSCO) in San Diego. The ship is expected to be delivered to the Navy in 2018.