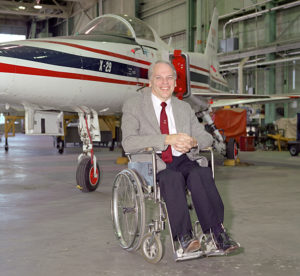 Ken Iliff worked at NASA for four decades on revolutionary aircraft and spacecraft, including the X-29 forward swept wing aircraft behind him.

Kenneth W. Iliff, a driving force of modern methods of parameter identification and estimation and a pioneer in hypersonic research, died Jan. 4. He was 75.
“Dr. Ken Iliff, was amazing, insightful and brilliant,” said Al Bowers, chief scientist at NASA Armstrong Flight Research Center in California. “He was my friend. Ken was a key player in the X-15 and the lifting body flight research, and he had a deep love of hypersonic flight. Ken’s greatest work was his parameter identification techniques, which are still used today (and formally coded by his two most brilliant protégés Rich Maine and Jim Murray). His sense of humor and mischievous smile will be sorely missed.”
Iliff was key in formulating, perfecting, and advancing the science and technology of aircraft parameter estimation — how to formulate questions about aircraft performance once the answers are known, or how to determine “why” when the “what happens” is known.
His methodology on parameter estimation is one of the most significant analytical advances in flight research and testing, and his codes are used by virtually all flight test organizations. The codes are also used for identification of other dynamic systems, including submarines, economic models and biomedical models. He is also renowned for his contributions to model structure determination for high angles of attack flight.
“Parameter Estimation technology was a breakthrough in digitally analyzing the motions of an aircraft and the control surface inputs and extracting the characteristics of the vehicle in flight,” said former center director Ken Szalai. “His work directly contributed to safer and more efficient flight test, flight control design, and simulation development.”
Iliff’s contributions didn’t end with technical brilliance. 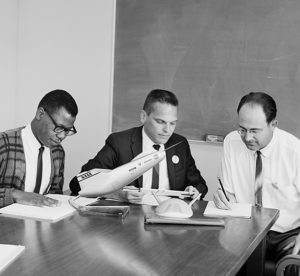 “Ken constantly encouraged people to innovate, create, and ask why something is happening,” Szalai said. “He promoted the idea that every flight is an opportunity to do scientific research to increase the understanding of flight in the real environment. He challenged people at every level to remember that the mission of NASA and the center was exploration and discovery and to act boldly. He also reminded managers that people were the most valuable asset of NASA and to treat them accordingly.”
Iliff’s peers recognized his many skills.
“Ken had a thorough understanding of flight research, and I respected his ability to work with diverse groups to achieve NASA’s goals,” said Patrick Stoliker, NASA Armstrong’s deputy director. “He was the consummate professional.”
Iliff joined the Flight Research Center (now Armstrong) in 1962, when flight data were recorded on film and measurements were made with a slide ruler. He began his career studying the handling qualities of the X-15 and a heating study and analysis of proposed modifications. Iliff spent his career at Armstrong and became the center’s chief scientist in 1994, a position he held until his retirement in 2002.
Iliff accelerated work on the M2-F1’s controls and demonstrated the advantages and pitfalls of different configurations. He worked on the M2-F2 heavyweight lifting body aircraft, transferred to the XB-70 program and provided support on the HL-10 lifting body aircraft.
Iliff also worked on the X-24A, M2-F3 and X-24B lifting body aircraft and early studies of the space shuttle, including computer simulations of the re-entry and landing of various shuttle designs. He was instrumental in assembling the shuttle’s Aerodynamic Data Book, a collection of aerodynamic data from wind tunnels and flight tests used in predicting the shuttle’s flight characteristics. Once the shuttle was making orbital flights, Iliff analyzed the re-entry data. He also worked on the X-29 forward swept wing, the F-18 High Angle of Attack Research Vehicle program and the F-15 Spin Research Vehicle.
He received a number of honors and recognitions during his career, including NASA’s highest scientific honor, the Exceptional Scientific Achievement Award in 1976. He also was a recipient of the Society of Flight Test Engineers Kelly Johnson Award in 1989 for his significant contributions to the fields of flight testing and flight research. He was a fellow of the American Institute of Aeronautics and Astronautics and was inducted into the National Hall of Fame for Persons with Disabilities in 1987.  Illif authored over 100 papers.