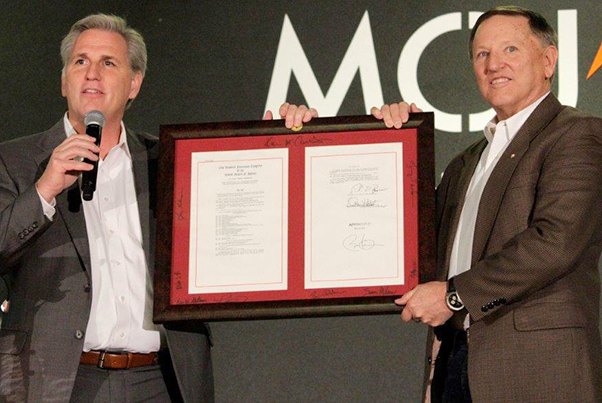 Farewell but not goodbye. Kevin McCarthy, House Majority Leader, presents Stuart Witt, CEO of the Mojave Air and Space Port a Declaration for his accomplishments in promoting spaceflight. McCarthy was the author of the “Space Act Bill,” but Stuart Witt had his finger prints all over it.

Limitless, selfless, humble, encourager, mentor, courageous and a crack shot were just a few of the titles presenters used to say congratulations and bon voyage to Stuart O. Witt, the CEO and manager of the Mojave Air and Space Port for the past 14 years; however, perhaps the most important and prestigious label of all, was friend.
An emotional, heart felt standing ovation gained momentum as event emcee, Lew Stultz, invited Witt to the stage at the Stu Witt Convention Center while Rocket Man played in the background.
Childhood friends, astronauts, spaceport staff, his dog’s veterinarian and politicians all came to wish him a happy retirement. Rumor has it, it’s only a little rest before he gears up on his next adventure.
“Stu definitely has a presence,” said Cedric Knight, founder and CEO of New Directions Technology and former Navy officer.
Other friends including Dr. Allen Peterson, Zack Scrivner, Tom Lackey, Ben Stark, David McBride, Jack Connell, Dave Short, Dick Rutan, Karin Nilsdotter, Michael Lopez, Peter Diamandis, Karina Drees and Kevin McCarthy, shared colorful, humorous and intimate stories — from flying off the USS John F. Kennedy, to being naked in a snow storm and late for the birth of his first son because he was hunting quail.
“It only takes one guy to ruin another guy’s reputation,” joked Stultz. “He created an environment where entrepreneurs can take a risk and have the opportunity to succeed or fail,” said Zack Scrivner, Kern County 2nd District Supervisor, explaining that when one goes into Witt’s office and sees the furs and antique guns next to the space memorabilia, “it represents Witt’s pioneering spirit, the same spirit you all have here in Mojave that binds you together.”
Assemblyman Tom Lackey said that Witt is a huge deal to the region and to the country. “The airport is Stu’s architecture and creative thinking; his commitment to excellence is unsurpassed by anybody I know,” said Lackey. 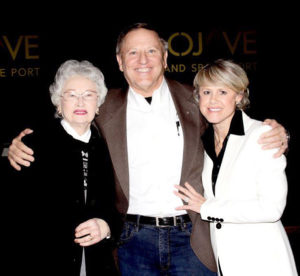 Favorite gals — Stuart O. Witt poses with his mother, Helen, and wife, Susie at his retirement celebration in the Stu Witt Center in Mojave. Turning Mojave Air and Space Port into a billion dollar business, Witt credits part of his success in not caring who gets the credit.

“It’s all what my granddad taught me, it’s all about the people,” explained Witt. “You have to invest in getting to know the people before you need them.”
He praised county workers Mike Cody and Donny Youngblood for their support and especially Lorelei Oviatt, Kern County Planner, who returned his texts and calls immediately. “I don’t know if anybody else in the county enjoys that, but thanks Lorelei, it made a huge difference.”
Michael Lopez-Alegria, one of several NASA astronauts at the party, has had 10 space walks, three shuttle missions and one ISS mission met Witt while he was interviewing for the position of president of the Commercial Spaceflight Federation an advocacy group of 60 companies that promote human spaceflight.
Witt was already a federation councilman and after interviewing with XCOR, SpaceX, Virgin and other giants, Witt was the last person to interview Alegria. Witt didn’t ask any of the usual questions, “he asked me about my family, my interests, he asked me about my friends and my personal life; he wanted to get to know me,” said Alegria. Four times during the interview Witt said Alegria needed to convince him he wanted the job. “I don’t think I ever got it right because later he told me that when it came time to decide, he actually voted against hiring me — thanks pal!”
Luckily, Witt was out numbered. Alegria became president, later, Witt became chairman and Alegria’s boss, mentor, counselor and most important, friend. Alegria said Witt helped him navigate in Washington, D.C. “It’s not the result of campaign contributions or doing favors, it’s because people care about Stu and Stu cares about people.”
David McBride, director of NASA’s Armstrong Flight Research Center at Edwards, said he met Witt at an Antelope Valley Board of Trade conference and thanked him for the connections that helped to integrate NASA with other aerospace companies.
“Stu is the sparkplug that started an alliance,” said McBride. The formal group, CSF, is based in Washington, D.C., but centered in Mojave and meets regularly with China Lake, Edwards, the industry at Mojave and elected representatives. “You really helped us to have a voice that we didn’t have before,” thanked McBride.
Witt also helped him to make international connections and to expand his own horizons. Together, they made a journey above the Arctic Circle to meet with Karin Nilsdotter, CEO Spaceport Sweden.
“The comfort zone they say is a nice place but nothing ever grows there, well, Mojave for sure, is no comfort zone,” said Karin Nilsdotter, calling Mojave the epicenter of the commercial spaceflight industry, stating that Witt’s leadership has a fundamental impact internationally.
Spaceport Sweden was the first spaceport initiative outside of the United States.
Doing her homework on the industry, Nilsdotter said it didn’t take long to identify the leader of the pack, however, reaching him was a complete, other matter. 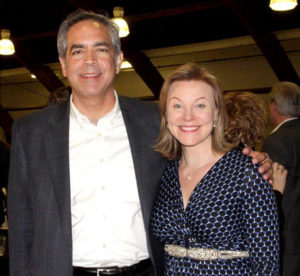 “If he wasn’t out in the field, he was up on a mountain or in a submarine with one of his sons, so reaching out from the other side of the globe was like being from a galaxy far, far away.” Determined, Nilsdotter simply showed up at Mojave. They formed a friendship and together worked on policies and operational issues as well as outreach to inspire future generations.
Peter Diamandis, Founder and CEO of the XPRIZE Foundation thanked Witt for building a foundation that everyone in Mojave can build upon, stating that Witt made a huge difference to everybody in the room — when the rest of the world said no, Witt said yes. “You gave birth to their dreams, you gave a launch pad for their dreams.”
For the first time, Kevin McCarthy, who serves in the U.S. House of Representatives for California’s 23rd district and is the House Majority Leader, missed a Congressional session in order to be at Witt’s party and described him as “limitless.” McCarthy said he was the author of the Space Act — but it had Witt’s fingers all over it.
“I’m happy that so many people had such nice things to say about Stuart,” said his mother, Helen Witt, 86, after the party, claiming that he was a very busy and outgoing boy while thankfully, her other son Steven, was quite quiet.
As a toddler, he wanted to have lunch at airports so he could watch the airplanes. As a teenager he got up early and worked hours before school to earn money for flying lessons. He shared wonderful experiences with his parents, such as treating them as VIP guests on carriers and giving them front row seats to watch his astronaut friends land the space shuttle.
“I know he is a good man and wonderful son, but I guess I didn’t really know how important he was, to me he is just my son.”
“It was a hell of a ride folks,” said Witt as he looked around the event center. “To be a kid from Onyx, surrounded by spaceships, cool vehicles and astronauts, the majority leader and my family, and my friends, it’s very humbling, it’s almost surreal.”