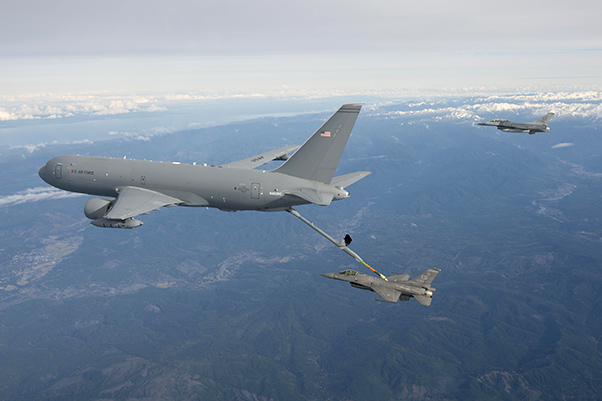 The KC-46A Pegasus successfully transferred fuel through its boom to an F-16C Fighting Falcon Jan. 24 to demonstrate aerial refueling operations in advance of its first production decision later this spring.
The KC-46A passed 1,600 pounds of fuel to an F-16C piloted by Lt. Col. Daniel Alix of the 416st Flight Test Squadron, 412th Test Wing out of Edwards AFB, Calif., who characterized the mission as a complete success.
Officials said it was a big step forward for the program and for the tanker capability that will serve as the backbone of Air Force global operations over the coming decades.
“I’m extremely proud of the entire industry and government program team that made today happen,” said Brig. Gen. Duke Z. Richardson, the Air Force program executive officer for tankers, Air Force Life Cycle Management Center. “This aerial refueling marks the first of many, and represents years of hard work beginning to pay dividends.”
The tanker has a robust in-flight refueling demonstration schedule over the coming weeks. The test with the F-16C fulfilled the requirement to connect to a light/fast receiver. The remaining tests with the boom will use an A-10 Thunderbolt II as the light/slow receiver and a C-17 Globemaster III as the heavy receiver.
Flight tests employing the centerline drogue system and wing aerial refueling pods will use an F-18 Hornet as the light/fast receiver and an AV-8B Harrier as a light/slow receiver. The KC-46A will also have to demonstrate its receiver capability by taking fuel from a KC-10 Extender.
These refueling demonstrations represent the significant remaining test hurdles before proceeding to a Milestone C low rate initial production decision. Program officials anticipate awarding the first production contract shortly thereafter.
“These are exciting times for the KC-46A program,” said Col. Chris Coombs, the KC-46 system program manager, Air Force Life Cycle Management Center. “We have had plans on paper and data from simulation labs, but this in-flight demonstration shows we are truly making progress on bringing this capability of the next generation of tankers to the warfighter supporting our global missions for years to come.”
MSgt. Lindsay Moon, a 13-year veteran boom operator, operated the boom controls passing fuel for the mission.
“This mission was a significant event towards certifying this new tanker,” said Moon, who is assigned to the 418th Flight Test Squadron Detachment 1 in Seattle, Washington. “Controlling the boom from the Air Refueling Operator Station is night and day different from laying on your belly in a KC-135. The system advances being rolled into the KC-46 will give the operator great awareness.”
Lt. Col. Donevan Rein, also with Detachment 1 in Seattle, Wash., was the Air Force pilot onboard the KC-46A during the test sortie.
The Air Force contracted with Boeing in February 2011 to acquire 179 KC-46A tankers to begin recapitalizing the aging tanker fleet. The program is currently working to meet the required assets available date, a milestone requiring 18 KC-46A aircraft and all necessary support equipment to be on the ramp, ready to support warfighter needs, by August 2017.