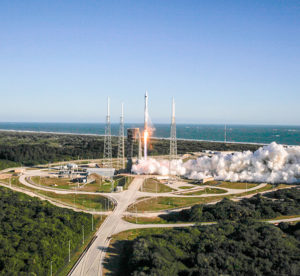 Boeing and the U.S. Air Force Feb. 5 completed the GPS IIF constellation with the launch of the 12th Boeing-built satellite.
Following on-orbit tests, GPS IIF-12 will be formally declared operational in approximately one month, making it the 50th GPS satellite Boeing will have delivered on orbit to the Air Force.

Since the first launch May 27, 2010, the GPS IIFs have advanced the Air Force’s Global Positioning System modernization program by improving accuracy and security while introducing new civilian and military capabilities to a system used by millions of people around the world.

Boeing has been the prime contractor for GPS since the program’s inception, providing multiple generations of satellites that have collectively accrued more than 540 years of on-orbit operation.

GPS IIF-12 lifted off from Cape Canaveral Air Force Station aboard a United Launch Alliance Atlas V launch vehicle at 8:38 a.m. EST. About three hours and 23 minutes later the spacecraft was released into its medium Earth orbit of about 12,000 miles. Signal acquisition was confirmed at 12:09 p.m. EST.

Boeing and its heritage companies have been advancing satellite technology for more than 50 years. Continuing investments in space are helping the company retain its industry leadership as it begins its second century in 2016.