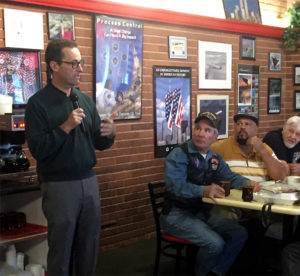 Flying supersonic would be the way that Rep. Steve Knight, R-Antelope Valley, would like to travel from his home 25th District back to Washington, D.C., and he thinks a lot of other people would like to arrive at their destinations twice as fast.

The first era of supersonic commercial travel ended in 2003 when the Concorde SST built by Aerospatiale and the British Aircraft Corporation made its final flight. Environmental considerations from sonic booms ended the 34-year period of trans-Atlantic service that carried paying passengers from London and Paris to Dulles International Airport in the Washington suburbs, and JFK International in New York.

Knight, who specializes in aerospace on Capitol Hill, believes a new era of supersonic commercial flight can be ushered in with a research and development push from NASA, emphasizing the work done by the aeronautics component of the National Air and Space Administration.

“I think flying supersonic would be great, because I could fly across the country in three hours instead of five or six hours,” Knight told at a veterans’ breakfast coffee gathering in Lancaster.

The United States owes it to itself and its competitive position out in the global economy to resume a push toward fielding the aircraft that could fly supersonic without raising environmental alarms, he said. The vintage Concorde could fly Mach 2.

“Right now, China is working on flying supersonic, and you can bet that in a couple of years they will be flying supersonic across China, and they won’t care about the sonic booms,” he told the group of about 25 veterans of service from each of the military branches. “They don’t have the FAA to worry about.”

One veteran asked him, then, what about sonic booms?

NASA research, Knight said, is the key to diminishing to “boom” in sonic booms. He cited a project carried out in recent years at the Neil Armstrong Flight Research Center based out at Edwards Air Force Base. It involved an F-15 Eagle fighter jet dedicated to NASA research flying with a long tail boom so that the jet’s shock wave was diminished when it broke the sound barrier.

“You’ll still feel it on the ground, but the shock wave is dispersed. If we can work (and fund) those projects that disperse the shock wave, we will be flying supersonic,” Knight said, and that would assist his personal quest to fly back to Capitol Hill in three hours.

Knight, heading into his second year in office after election in November 2014, sits on the House Committee on Science, Space and Technology. Part of his duty to the 25th District, which includes the Antelope Valley and the Santa Clarita and Simi valleys, is to ensure federal funding that will underwrite research and jobs comes in his area of Southern California. In that, he said, he is aided by his professional and personal relationship with House Majority Leader Kevin McCarthy, in the adjoining 26th District, which includes Edwards AFB.

With $571 million in the fiscal year 2016 budget request for aeronautics research at NASA, Knight said he would like to persuade NASA’s administrator, Charles Bolden, and Congress, to bump the percentage of aeronautics funding research from 3 percent to about 5 percent of the agency’s total budget.

“If we can change it from 3 to 5 percent, we’re going to see a lot more programs out there,” Knight said.

He added that he would make it his business in congressional committees to get as much of that funding as possible routed to the Armstrong Flight Center at Edwards.

“This is a benefit to us as civilians,” Knight said.

He cited NASA’s development of winglets on passenger aircraft, improving fuel economy and the stability of the aircraft.
“As civilians, that affects us,” he said.

Knight, on his visits within the district, spoke at two veteran gatherings in the Antelope Valley within two days. He visited the weekly Coffee For Vets hosted by Crazy Otto’s restaurauteur Jin Hur, who sponsors many military-related events, including the Antelope Valley Freeway signage that honors fallen Marine Joseph Lopez-Pratti and the Marines of the 3/5 Dark Horse regiment at Camp Pendleton, in which his son, Cpl. Richard Hur served in Afghanistan. Knight also visited the Antelope Valley Veterans Community Action Coalition meeting at Birdie’s Restaurant.

To the entire Valleywide veteran community, Knight urged any veterans with difficulties, whether with claims, the Department of Veterans Affairs, or benefits, to be in contact with Lisa Moulton, his chief of staff in Palmdale, and Christine Ward, the congressman’s field deputy for veteran matters.

Ward, Knight said, “can get anything done at the federal level.” He added, “A veteran should not have to be banging his head against the wall to hear back about something.”

“If you are not in touch with them, you need to be,” Knight said. “We also want to be sure that we are reaching out to younger vets.” He laughed, “Not that there is anything wrong with us vets who are, well, not younger anymore. But we need to bring in and assist younger veterans.”