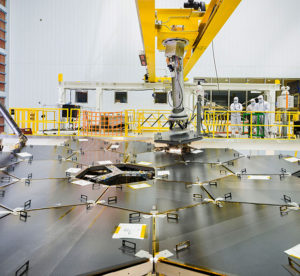 Inside a massive clean room at NASA’s Goddard Space Flight Center in Greenbelt, Md., the James Webb Space Telescope team used a robotic am to install the last of the telescope’s 18 mirrors onto the telescope structure.

The 18th and final primary mirror segment is installed on what will be the biggest and most powerful space telescope ever launched.
The final mirror installation Feb. 3 at NASA’s Goddard Space Flight Center in Greenbelt, Maryland marks an important milestone in the assembly of the agency’s James Webb Space Telescope.

“Scientists and engineers have been working tirelessly to install these incredible, nearly perfect mirrors that will focus light from previously hidden realms of planetary atmospheres, star forming regions and the very beginnings of the Universe,” said John Grunsfeld, associate administrator for NASA’s Science Mission Directorate in Washington. “With the mirrors finally complete, we are one step closer to the audacious observations that will unravel the mysteries of the Universe.”

Using a robotic arm reminiscent of a claw machine, the team meticulously installed all of Webb’s primary mirror segments onto the telescope structure. Each of the hexagonal-shaped mirror segments measures just over 4.2 feet (1.3 meters) across — about the size of a coffee table — and weighs approximately 88 pounds (40 kilograms). Once in space and fully deployed, the 18 primary mirror segments will work together as one large 21.3-foot diameter (6.5-meter) mirror.

While the primary mirror installation may be finished on the tennis court-sized infrared observatory, there still is much work to be done.

“Now that the mirror is complete, we look forward to installing the other optics and conducting tests on all the components to make sure the telescope can withstand a rocket launch,” said Bill Ochs, James Webb Space Telescope project manager. “This is a great way to start 2016!”

The mirrors were built by Ball Aerospace & Technologies Corp., in Boulder, Colorado. Ball is the principal subcontractor to Northrop Grumman for the optical technology and optical system design. The installation of the mirrors onto the telescope structure is performed by Harris Corporation, a subcontractor to Northrop Grumman. Harris Corporation leads integration and testing for the telescope. 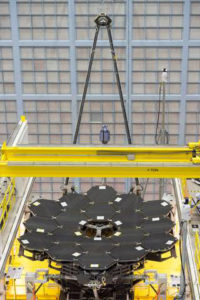 “The Harris team will be installing the aft optics assembly and the secondary mirror in order to finish the actual telescope,” said Gary Matthews, director of Universe Exploration at Harris Corporation. “The heart of the telescope, the Integrated Science Instrument Module, will then be integrated into the telescope. After acoustic, vibration, and other tests at Goddard, we will ship the system down to Johnson Space Center in Houston for an intensive cryogenic optical test to ensure everything is working properly.”

The James Webb Space Telescope is the scientific successor to NASA’s Hubble Space Telescope. It will be the most powerful space telescope ever built. Webb will study many phases in the history of our universe, including the formation of solar systems capable of supporting life on planets similar to Earth, as well as the evolution of our own solar system. It’s targeted to launch from French Guiana aboard an Ariane 5 rocket in 2018. Webb is an international project led by NASA with its partners, ESA (European Space Agency) and the Canadian Space Agency.