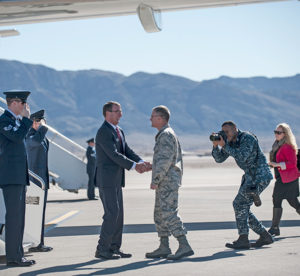 After meeting with service members at the California-based Naval Air Weapons Station China Lake and Marine Corps Air Station Miramar, Carter spoke to Nellis airmen to preview the fiscal year 2017 defense budget and discuss its impact on the Air Force.

“The key is readiness; that’s the key to the Air Force today and tomorrow, and it happens here,” Carter said. “What I’m asking the Air Force to do … is maintain a very high level of readiness, and that you get from Nellis.

“This is the only test range where you can bring it all together — not only all the kinds of aircraft you see on the ramps out there, but the satellites you don’t see and the cyber (activity) you don’t see. In today’s world, all of that is brought together only here at Nellis, so it’s an enormously important installation. That is reflected in our budget, where we’re adding $1 billion more for training of this kind over the next five years. That’s going to support no fewer than 34 major exercises.”

The defense secretary spoke about attaining a lasting defeat of the Islamic State of Iraq and the Levant, while also ensuring the department is ready for potential conflict with higher-end adversaries and more technologically advanced threats in the future.
Carter said the men and women of the Air Force — like the ones he visited earlier in the day at the 66th Rescue Squadron and 823rd Maintenance Squadron — will be the keys to the direction the Defense Department plans to take the service in the future.

“We are adding funds to the Air Force budget to grow manpower in the maintenance area because we need more maintainers, given the high-operations tempo, to keep our aircraft ready,” Carter said. “We’re doing all this at the same time that we are modernizing the Air Force, so you’ll see in the future new aircraft here on the ramp.

“You’ll see, shortly, the KC-46 (Pegasus) and one day maybe you’ll see — but maybe we won’t show — a new bomber, and there’s other things you also won’t see because we like to have some surprises for potential adversaries,” he continued. 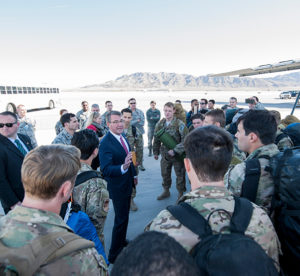 “It’s indicative that at his last moment on the ramp, when he realized there were airmen returning, he delayed his departure and said let’s go meet those airmen. Those airmen had no idea, they just flew back from their (area of responsibility), climbed off the plane, and here’s the secretary of defense welcoming them back,” said Maj. Gen. Jay Silveria, the U.S. Air Force Warfare Center commander. “As he said, he supports us 1,000 percent.”