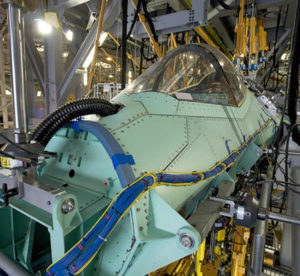 Each phase of testing, lasting a total of 8,000 hours, is equivalent to an entire lifetime of the airframe once it enters service.

Two complete ‘lifetimes’ of the airframe — equivalent to 16,000 hours -have already been completed on a Conventional Take-Off and Landing variant airframe at the company’s structural test facility and the third set of tests will commence in early 2016. These tests prove the airframe will be able to safely handle a variety of flying conditions it could experience when in service.

The 350-tonne airframe structural test rig at the Brough site was built to ‘fly’ the F-35 Lightning II through a series of flight scenarios.  More than 20 miles of wiring, 2,500 strain gauges and 160 loading actuators are designed to subject the aircraft to a range of loads that it could typically encounter in actual flight.

“Reaching two complete lifetimes of testing is an important milestone for our structural test facility at Brough, and demonstrates the proven endurance of the F-35 airframe,” said Andy Prendergast, Operations Manager for Structural and Dynamic Test, BAE Systems. We have pushed the testing to the limits, ensuring that the F-35 Lightning II aircraft will fly safely and effectively throughout its lifetime of service. We will further qualify this by starting a third lifetime of testing.”

The structural test team at Brough are experts in their field having rigorously tested a dozen different aircraft types since the 1970s, including Buccaneer, Harrier, Tornado, Hawk and Eurofighter Typhoon.