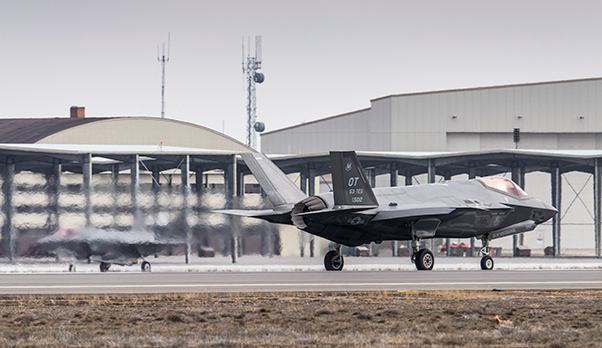 Two F-35A Lightning IIs taxi after landing at Mountain Home Air Force Base, Idaho, Feb. 8. The F-35s, visiting from Edwards AFB will be part of an initial operating capability test at the nearby range complex.

A much anticipated and important test mission for the F-35 Joint Strike Fighter Program is underway with the “deployment” of six operational test and evaluation F-35s and more than 85 Airmen from the 31st Test and Evaluation Squadron, which took place Feb. 8 and 9.

The achievements of an F-35A squadron testing ability to deploy, employ and sustain operations will set the benchmark capability for the Air Force to declare F-35A Initial Operational Capability scheduled for this fall according to the 53rd Wing. 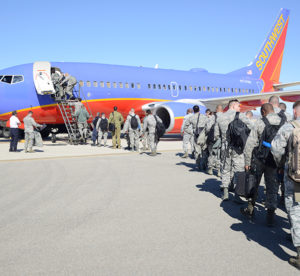 Airmen from the 31st Test and Evaluation Squadron board a Southwest 737 Feb. 9. The commercially contracted plane took the Airmen, mostly maintainers, to Mountain Home Air Force Base, Idaho, where they will spend about a month conducting a test event for the F-35 Joint Strike Fighter.

During the test at Mountain Home, the aircraft will be engaged in simulated combat scenarios to exercise representative mission processes such as tasking, execution, debrief and intelligence reporting. The test team will be working to capture a broad spectrum of capabilities and limitations of the F-35 system to include both operations and maintenance.  The team will focus on areas such as mission planning, scheduling, weapons building/loading, sortie generation, life support, mission employment, debrief and aircraft turn.

Nellis Air Force Base, Nevada, will serve as a simulated remote air operations center for the deployed environment.  Mountain Home AFB is providing a secure location with ranges to employ fourth-generation aircraft as well.  F-35As will integrate with F-15Es from the 366th Fighter Wing at Mountain Home and A-10 Warthogs from the 124th Fighter Wing at Gowen Field, Idaho.

The entire test event is expected to last about a month.