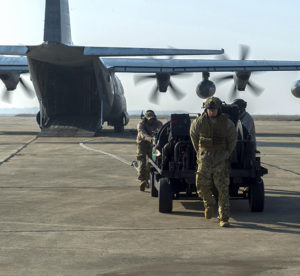 Members of the 100th Logistics Readiness Squadron move a forward area manifold cart out of the back of an MC-130J Commando II, assigned to the 67th Special Operations Squadron, during forward area refueling point training at Plovdiv, Bulgaria, Feb. 9, 2016. The FAM cart weighs approximately 3,500 pounds and is mainly extracted from the aircraft.

A-10C Thunderbolt II pilots, assigned to the 74th EFS and currently deployed to Bulgaria as part of the European Theater Security Package, performed unimproved surface landings on an austere landing strip to simulate conditions of a deployed environment.

“The A-10 is a fighter aircraft that specializes in close air support,” said Lt. Col. Bryan France, the 74th EFS commander. “This training will prepare our pilots to land in a variety of surface conditions allowing us to bring the fight even further.”

“A lot of preparation is done by the combat controllers to make the austere landing strip as favorable as possible for the pilots,” France said. “They go in early to control that airfield and provide to the pilots’ needs.”

Austere landings are nothing new for the TSP mission; however, the A-10s were not the only aircraft using the landing strip. An MC-130J Commando II, assigned to 67th Special Operations Squadron, also practiced landing on the unimproved surface, bringing with it a key capability.

“The MC-130 is a tactical airlifter designed to operate in austere environments,” said Capt. Justin Nadal, a 67th SOS MC-130J aircraft commander. “Because it can carry a lot more cargo while simultaneously having the ability to land in these difficult conditions, it makes for an effective aircraft to provide supplies to troops on the ground or in this case a forward area refueling point to extend the range of our aircraft assets.” 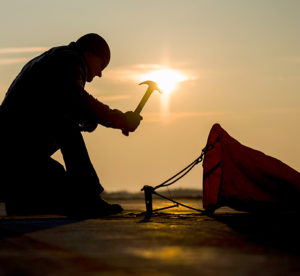 A 321st Special Tactics Squadron combat controller hammers into place a distance marker before the start of an austere landing exercise at Plovdiv, Bulgaria, Feb. 9, 2016. Combat controllers supported the training for multiple aircraft deployed to Bulgaria as part of Operation Atlantic Resolve, which aims to assure the U.S.’s commitment to the security and stability of Europe.

A forward area refueling point, or FARP, is a location where fuel can be transferred from one aircraft to another; in this case from the MC-130 to the A-10s.

There are less than 60 Airmen in the Air Force that share the title of FARP team member and SrA. Tristan Mitchell, a 100th Logistics Readiness Squadron fuels operator, is one of them.

“We can provide fuel to a range of different aircraft,” Mitchell said. “Our job is to make sure our birds get the fuel they need quickly to get back in the fight faster.”

The FARP team can be ready to transfer fuel in less than 15 minutes after exiting the MC-130. Once set up, the MC-130 can provide tens of thousands of pounds of fuel to multiple aircraft in a matter of minutes.

This fast-paced refueling and interoperability between different groups is a continued effort to sustain enemy deterrence and assure European allies the U.S. commitment to the region.

“FARP operations in combination with austere field operations provide commanders the ability to project combat capability to areas otherwise denied by traditional airpower methods,” France said. “This exercise demonstrates our ability to integrate across commands with joint forces while supporting our NATO allies.”

A 74th Expeditionary Fighter Squadron A-10C Thunderbolt II takes off during a training exercise at Plovdiv, Bulgaria, Feb. 10, 2016. The aircraft deployed to Bulgaria in support of Operation Atlantic Resolve.