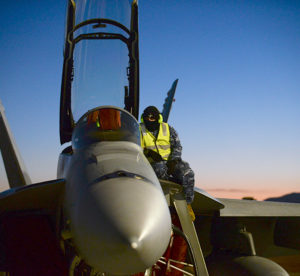 An aircrew member belonging to 1 Squadron, RAAF Amberley, Australia, perform maintenance checks on an F/A-18 Super hornet during Red Flag 16-1 at Nellis Air Force Base, Nev., Feb. 2. Since its establishment in 1975, Red Flag has played host to military units from more than 30 different countries.

Red Flag 16-1, came to an end on Feb. 12 with aircrews and support personnel from around the world participating in the best training that simulates a deployed environment.

Red Flag, which was initiated in 1975, and is run by the 414th Combat Training Squadron’s where the mission is to maximize the combat readiness, capability and survivability of participating units by providing realistic training in a combined air, ground, space and electronic threat environment while providing for a free exchange of ideas between forces.

Included with U.S. forces in this exercise, the Royal air force from the United Kingdom as well as the Royal Australian air force partakes in the training to test their skills against some of the best in the world in air, space and cyberspace.

“Red Flag is one of the largest training exercises that we do as an Air Force.,” said Col. Derek France, Red Flag Air Expeditionary Wing commander. “It involves all services, coalition partners and it happens on the Nevada Test and Training Range where you get around 130 aircraft and squadrons from all over that come together for a three-week exercise where they train at the highest level of combat.”

During 2016, the 414th CTS plans on hosting four exercises where new participants will come to Nellis Air Force Base, Nev. to receive training that they can use in a deployed location.

“It’s a golden opportunity, a truly national treasure when you combine the range, the adversaries that we train on both air and ground, add the cyber effects that are in play and bring everything together,” France said.

A key part for Red Flag exercises is teamwork, where the exercise aims to have all units from around the world work together during a mission.

“We have been able to have U.S. members on Australian jets, Australian and British members on U.S. jets where we all work together,” said Capt. Benjamin Matchett, Offutt AFB 55th Operations Group tactical coordinator, who is participating in his second Red Flag exercise. “Really seeing how each coalition partner works independently and how we work together, its fairly unique.”

“It’s been very eye opening dealing with different assets in a way I haven’t had a chance to before,” said Kerse. “Before, we might have worked with the British or the Australians, it’s never been this close or we have never had the ability to fly on the same jets or work in the same area and be able to share that knowledge amongst another.”

With coalition partners working together during the exercise, France wants crews prepared by the time the head down range.

“One of the goals for this exercise is that that first combat experience seems pretty tamed compared to Red Flag,” France said. “If we are doing that right, then Red Flag is hitting the mark.”

The integration of coalition partners from around the world is an important factor in a Red Flag exercise, as it offers a realistic battlespace in which U.S. and allied warfighters work together towards a set of common objectives.

“You get units that come in and do their jobs very well,” France said. “But now, they do their jobs and realize how they integrate and the synergies that are involved and how they can fly, fight and win across all of the domains. It’s pretty awesome fun to see.”
Red Flag 16-2, which is slated to begin Feb. 29, is a two week exercise that aims to continue training crews in air, space and cyberspace.