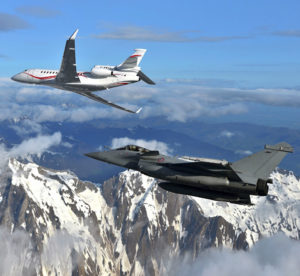 Dassault Aviation will present the top of the line Falcon 7X trijet and the Falcon 2000LXS twin at the Singapore Airshow, the largest aerospace and defence exhibition in the Asia Pacific region.

The six-day event, which opens Feb. 16, will take place at Singapore’s Changi Airport and will coincide with Dassault Aviation’s 100th anniversary.

In addition to the Falcon 7X and 2000LXS, the air show will feature the Dassault Rafale fighter, whose advanced technologies account for much of the success of the Falcon business jet line.

More than a hundred Falcons are currently based in the Asia Pacific region, including all current production models from the Falcon 7X and Falcon 2000LXS/S to the Falcon 900LX long range trijet, as well as older legacy Falcons.

The exceptional flexibility, operating economy and comfort of Falcon business jets make them ideal for a region that is known for its many small hard to reach airfields. These qualities have enabled Falcons to develop a strong market presence throughout the Asia Pacific.

Operators in the region also fly some 50 Falcon 2000 family aircraft.

“Despite some softness in the present market, we remain extremely bullish on prospects in the Asia Pacific,” said Eric Trappier, Chairman and CEO of Dassault Aviation. “One very encouraging sign is the recent success we’ve had in the key multirole sector.” Last November, Dassault delivered a Falcon 2000LX medevac aircraft to the Beijing Red Cross Emergency Medical Center, just months after placing two Falcon 2000LXS Maritime Surveillance Aircraft with the Japan Coast Guard.

The arrival of Dassault’s new Falcon 8X trijet, now nearing the end of its flight test campaign, is eagerly anticipated in the Asia Pacific, where it will be able to connect Singapore to most European capitals nonstop without sacrificing the flexibility and operating economy for which all Falcons are famed.

The 6,450 nm/11,945 km 8X, which made its first flight just one year ago and is due to begin deliveries in the second half of 2016, will feature the longest Falcon cabin and the lowest ownership and operating costs in its class. The 8X will offer all the advanced technological features of the popular Falcon 7X, from which it is derived, including the industry’s quietest and most comfortable cabin. It will also feature the greatest range along with the most extensive selection of cabin configurations available on any large cabin business jet.

To ensure optimum service levels for its expanding fleet, Dassault has been rapidly expanding its support network in the Asia Pacific and around the globe.

The company recently expanded spares capacity in Beijing and Singapore, boosting inventory in the region to nearly $35 million, including the top 3,000 high demand parts for in-production aircraft.

The Deer Jet agreement followed a string of other recent measures to reinforce Falcon Support in the Asia Pacific, including the establishment of a regional customer service in Beijing, led by Kathy Liu, Director of Customer Support for Asia, the Beijing office is supported by six spare parts depots and 12 Falcon Authorized Service Centers strategically located throughout the region.

The Falcon fleet is designed to meet the full range of operator needs. The very long range Falcon 7X features advanced systems largely derived from military aircraft along with an ultra-quiet, roomy interior that allows passengers to disembark fresh and relaxed after a 13 hour flight.

The 4,000 nm/7,410 km Falcon 2000LXS offers improved airport performance, payload and cabin comfort compared to the Falcon 2000LX, which it replaced in 2013. Equipped with full-length inboard slats and high-mach blended winglets that enhance approach and landing capabilities, the 2000LXS can access more airports than any other aircraft in its category.

The Falcon line is rounded out by the 4,750 nm/8,800 km Falcon 900LX trijet. Equipped with Honeywell TFE731-60 engines and a state-of-the art EASy II flight deck, the proven 900LX combines long range and low-speed landing capability with exceptional hot-and-high performance. It is the most efficient airplane in its class, with a fuel burn up to 40% lower than other comparable aircraft.