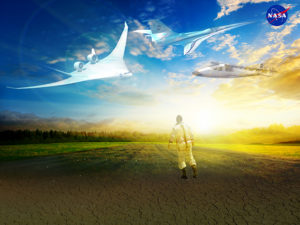 A proposed $3.7 billion 10-year aeronautics initiative includes development of technology demonstrators. From left, clockwise, are concepts of a hybrid wing airplane, a supersonic demonstrator and an electric propulsion aircraft.

NASA aeronautics could see its biggest boost in more than a decade if a $3.7 billion plan is approved that would bring agency-matured technology to flight during the next 10 years.

The New Aviation Horizons initiative, if approved by both houses of Congress, would include demonstration and validation of new technologies to dramatically reduce fuel consumption, emissions and noise and open new markets for industry. The initiative would start with $150 million in the proposed fiscal year 2017 budget for the Aeronautics Research Mission Directorate. The aeronautics budget would then increase every year to a total of nearly $1.3 billion in 2021.

The initiative aims to develop aeronautics research for transformative capabilities to enable the U.S. aviation industry to maintain and advance its global leadership and continue the nation’s economic growth and job creation through aviation. Included in the plan are ultra-efficient aircraft such as a hybrid wing body aircraft, a hybrid electric airplane and a low-boom flight demonstrator. Multiple human-piloted demonstrators are planned in each of the categories.

“All the credit goes to Jaiwon Shin (Aeronautics Research Mission Directorate associate administrator) and his strategic planning team for putting together six strategic thrusts and having a consistent, obtainable method for getting there,” said David McBride, NASA Armstrong Flight Research Center director.

Armstrong, located on Edwards Air Force Base in California, has validated through flight a number of the concepts leading up to the plan, said McBride, who has been an advocate for demonstrator aircraft.

For example, the X-48 flew at Armstrong showing increased fuel efficiency and reduction of air and noise pollution. Armstrong researchers are working on development and integration of a hybrid electric aircraft and reducing the signature, or directing sonic booms, has been the focus of many research projects flown at Armstrong, McBride explained.

“It is time for new experimental aircraft to prove integrated systems work as the research has shown so far,” McBride said. “The proposed budget initiative is a logical step to validate and demonstrate these technologies for industry to use in reducing noise and air pollution and increasing fuel efficiency.”

The proposed budget also permits the continuation of NextGen to deliver major benefits to airlines and travelers with the development and transfer of revolutionary air traffic management tools that increase the efficiency of operations while enabling more prognostic system-wide safety.

Another element of NASA’s work is expanding innovative university research and increasing student involvement in implementing the NASA Aeronautics vision and strategy.

NASA Armstrong’s proposed budget is $273 million, which does not include funds from the aeronautics initiative until roles and responsibilities of the centers are detailed, McBride said. It does include $84 million for aeronautics, which includes contributions to aviation safety, advanced air vehicle research and aeronautics test capabilities related to flight operations and test architecture.

Exploration has $25 million for testing of the Orion Crew Vehicle and Advanced Exploration Systems, such as Armstrong’s support of the Orion parachute landing system to be used for the vehicle’s return from space.

Education is proposed at $1 million for NASA’s education efforts. In addition, $62 million is proposed for safety, security and mission services that ensure the facilities, tools and services needed for conducting NASA’s missions are available and $18 million for construction and environmental compliance restoration.

The NASA budget supports developing the technologies that will make future space missions more capable and affordable, partnering with the private sector to transport crew and cargo to the International Space Station, continuing the development of the Orion crew vehicle, Space Launch System and Exploration Ground Systems that will one day send astronauts beyond low Earth orbit. The budget also keeps the Webb Telescope on track for a 2018; builds on scientific discoveries and achievements in space; and supports the Administration’s commitment to serve as a catalyst for the growth of a vibrant American commercial space industry.