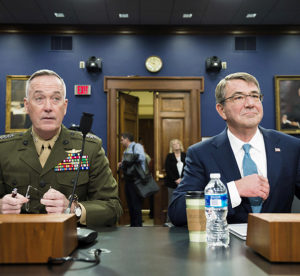 The Defense Department’s fiscal year 2017 budget proposal accounts for America’s leading role as an underwriter of worldwide security and the need to invest in technologies and people in a new strategic era, Defense Secretary Ash Carter said Feb. 25.

“In this budget,” Carter told the panel, “we’re taking the long view. We have to, because even as we fight today’s fights we must also be prepared for what might come 10, 20, 30 years down the road.”

Five evolving strategic challenges drive DOD’s planning and budgeting, the secretary said, and described the range of issues DOD is addressing with Russia, China, North Korea, Iran and terrorism — especially the Islamic State of Iraq and the Levant.

Fighting ISIL
Describing the ongoing fight against ISIL and other terrorist organizations, Carter said the coalition continues its work in Iraq and Syria and is extending the fight into Africa and Afghanistan.

“As we’re accelerating our overall counter-ISIL campaign we’re backing it up with increased funding in 2017 and requesting $7.5 billion, which is 50 percent more than last year,” he said.

This week the coalition made important strides in the counter-ISIL campaign in Syria, Carter said, noting that “capable and motivated local forces supported by the U.S. and our global coalition have reclaimed territory surrounding the east Syrian town of Shaddadi. It is a critical ISIL base for command and control, logistics, training and oil revenues.”

By encircling and taking Shaddadi, he added, the coalition is seeking to sever ISIL’s last major northern artery between Raqqa and Mosul.

New investments
Dealing with such evolving challenges requires new investments, new postures in some regions, and some new and enhanced capabilities, the secretary said, adding that each challenge must be addressed across all domains.

“Not just the usual air, land and sea,” he said, “but also … cyber, electronic warfare and space, where our reliance on technology has given us great strengths and great opportunities [but] led to vulnerabilities that adversaries can seek to exploit.”

The department’s budget, capabilities, readiness and actions must demonstrate to potential foes “that if they start a war we have the capability to win,” said Carter, who described critical investments in the budget to help address evolving challenges.

For the European Reassurance Initiative to strengthen the nation’s defense posture in that region, the budget proposes quadrupling 2016 spending to $3.4 billion.

The department is emphasizing lethality in the Navy with new weapons and high-end ships and by extending its lead in undersea warfare, and doing more in cyber, electronic warfare and space, investing a combined total of $34 billion in the three domains in 2017, Carter added.

The budget also increases investments in science and technology and building new bridges to the U.S. system of innovation to stay ahead of future threats, he said.

The department is innovating operationally, making contingency plans and operations more flexible and dynamic in every region, and building the force of the future to continue to recruit and retain the best talent from future generations, the secretary said.

“That’s … why we’re opening all combat positions to women, as well as doing more to support military families,” he added, “to improve retention and also to expand our access to 100 percent of America’s population for our all-volunteer force.”

Broader shift
DoD also is pushing for needed reforms across its enterprise, from continuously improving acquisitions to further reducing overhead to proposing new changes to the Goldwater-Nichols Act that defines much of its institutional organization, Carter said.

The budget reflects a broader shift as well, he told the panel.

“We in the Defense Department don’t have the luxury of just one opponent or the choice between current fights and future fights — we have to do both. That’s what this budget is designed to do and we need your help to succeed,” the secretary said.

The greatest risk DOD faces is losing the stability it has had in the budget for the past two years, and having uncertainty and sequester in future years, Carter told the panel.

“That’s why going forward the biggest concern to us strategically in the Congress is averting the return of sequestration next year so we can sustain all these critical investments over time,” the secretary said.