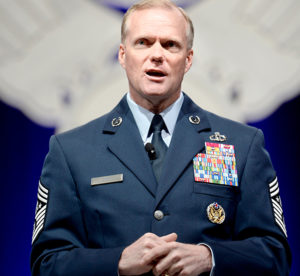 Cody’s theme, “Why we serve,” gave substance, emotion and purpose to his talk that reflected on 25 years of continuous combat operations and highlighted stories of Airmen who continue to serve today.

“I always love how (Air Force Chief of Staff Gen. Mark A. Welsh III) always says, ‘Without airpower, you lose,’ and I always like to finish that … ‘and without Airmen, there is no airpower,’” Cody said. “It’s really important to remember that. We can have all this stuff, but without our airmen, it doesn’t happen.”

The Air Force has seen continuous combat for the past 25 years. The men and women who serve in today’s Air Force, most of whom joined after 9/11, are more engaged around the globe than back in 1991, but with fewer people, Cody mentioned.

Cody went on to ask the question, “Who are these airmen and why do they serve?

“When you think about this dynamic, it’s unlike any other dynamic that has existed in our history of (people answering) the call to service, so you have to get to know them a bit,” Cody said. “It really reconnects you to why it’s important, what we do and talk about here, because at some given point we are going to bring it right back to these men and women.”

Cody went on to highlight some of the airmen and family members from across the Air Force who he had the chance to meet, saying that’s what really motivates and inspires him.

“It’s great what we are able to do for our country; it’s great what we represent globally, but nothing is better than the men and women that do it for us and do it with us,” Cody said. “We are a family. We’re in this together and we will need each other to get through some of (the hard) times. What a great testament to what it means to serve. Beyond just doing great things for our country, you are doing it for the people who put this uniform on with you.”

Cody answered questions from the crowd regarding military pay, retirement, healthcare, promotion testing and deployment dwell time. He ended his speech by awarding airmen from the geospatial intelligence analyst career field the 2016 Etchberger Team of the Year Award, named after CMSgt. Richard Etchberger, the most recent enlisted Medal of Honor recipient who was killed in action on March 11, 1968, at Lima Site 85 in Laos.

“Our airmen are proud; they are really, really proud of what they represent,” Cody said. “They understand that it actually is a privilege to put this uniform on. It is always an honor for me to represent them to the secretary and to the chief and certainly to our elected officials to let them know exactly what it is that each of them do and what their families do in service to their country.”