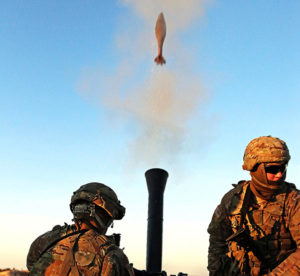 The Watervliet Arsenal, N.Y., announced this week that it has received a $4.6 million contract to start a new product line for the 81mm mortar system that will help reduce an infantryman’s fatigue and movement time over a cross-country route.

This next generation of an 81mm mortar bipod is a continuation of the Army’s effort to reduce the weight of small indirect fire systems that are carried by Soldiers, said Laura Pisculli, the arsenal’s supervisor of production planning and control. The arsenal already manufactures a lightweight mortar baseplate and tube.

“This multimillion dollar order will add to the Arsenal’s current workload more than 13,000 hours of direct labor,” Pisculli said. “Because this new product line will require a significant amount of preparation in regards to training and new tooling, our first delivery will not be until 2018.”

The first shipment of the mortar bipods is scheduled to leave the arsenal in March 2018 and the order should be complete by November 2018. Each bipod consists of about 25 close-tolerance, machined parts, and will weigh approximately 22 pounds, as compared to the 27 pounds of the legacy system.

Nevertheless, with the start of any new product line, there will be challenges, said Scott Huber, an arsenal general foreman.

“Manufacturing such products as Abrams tank cannons and 155mm howitzer tubes is extremely challenging given the tight machining tolerances,” Huber said. “But this product line is no less challenging as we will be working with material that is new to us, such as Kevlar and Teflon, as well as new processes that will require welding extremely hard materials such as Titanium.”

Huber explained that when the arsenal begins a new product line there is a significant amount of time spent writing computer programs, developing special tooling, and establishing new outside vendors to provide the raw material long before the first part is machined.

“Although delivery does not start until 2018, we already have a team, from procurement to production planners to machinists, working hard to produce the first two systems,” Huber said. “Long before we begin shipping these bipods to the Army, we will thoroughly vet the fit, form, and function of the new bipod through a rigorous quality control process. That will be our focus between now our first shipment in 2018.”

In addition to the workload and the revenue, there is another added value for this order.

“Anytime we get an order for a new product line, it creates a great sense of excitement in the workforce because they will be required to do something that they had not seen before,” Huber said. “We love a challenge here and when we know that our products will go from us into the Soldiers’ hands, I can’t think of any other job that would make us feel more proud of what we do.”

The 81mm mortar system is used primarily by the infantry as an indirect fire weapon when a high-angle trajectory is required to hit enemy troops, materiel, and positions. It has a range that exceeds 5,800 meters.

The Watervliet Arsenal is an Army-owned-and-operated manufacturing facility and is the oldest, continuously active arsenal in the United States having begun operations during the War of 1812.

Today’s arsenal is relied upon by U.S. and foreign militaries to produce the most advanced, high-tech, high-powered weaponry for cannon, howitzer, and mortar systems. This National Historic Registered Landmark had $138 million in revenue in fiscal year 2015 and has an annual economic benefit to the local community in excess of $100 million.