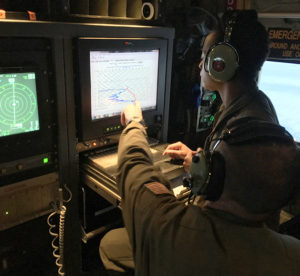 TSgt. Karen Moore and CMSgt. Rick Cumbo, 53rd Weather Reconnaissance Squadron loadmasters, analyze weather data being relayed to the aircraft by a dropsonde, a parachute-borne cylindrical instrument that collects meteorological data as it drops toward the surface of the water. The Hurricane Hunters flew several research missions Feb. 11-24, 2016, to collect meteorological data from atmospheric rivers above the Pacific to assist in improving West Coast weather forecasts.

The squadron teamed up with the National Oceanic and Atmospheric Administration, National Weather Service, Scripps Institution of Oceanography California, and Oregon and Washington emergency management offices for the research mission aimed at improving forecaster’s ability to predict where these atmospheric river storms will make landfall.

Atmospheric rivers, a corridor of concentrated moisture in the atmosphere, can lead to flooding, mudslides and damaging winds, and El Niño events contribute to warmer ocean waters which fuel these rivers with moisture. The organizations are taking advantage of one of the strongest El Niño seasons in the past 60 years to view the evolution of storms.

“We are tasked to fly during these specific events within the El Niño period in certain areas over the Pacific Ocean to collect information such as water vapor and temperature. This will allow meteorologists to forecast the amount of rain that is going hit California,” said Lt. Col. Jonathan Talbot, a 53rd WRS senior meteorologist.

Two Air Force Reserve WC-130J Super Hercules completed three missions with both crews flying 2,300 mile treks simultaneously within the atmospheric rivers. For two missions one crew flew out of Joint Base Pearl Harbor-Hickam, Hawaii, and the other crew from Joint Base Lewis-McChord, Wash., The last mission required a crew to fly a mission from Travis Air Force Base, Calif.

To collect weather data, crews release a dropsonde, which is a parachute-borne cylindrical device that gathers weather data not available through satellite imagery. The dropsondes collect air temperature, relative humidity, barometric pressure, and wind speed and direction as it drops toward the surface of the water.

An aircraft typically releases about 10-20 dropsondes; however, for these missions crews dropped anywhere from 40-60 dropsondes per flight across the width of the atmospheric river, said 1st Lt. Leesa Froelich, a 53rd WRS aerial weather reconnaissance officer. This data was sent real-time by satellite to the National Center for Environmental Prediction to create a multidimensional view of the rivers.

Knowing the amount of rain California will receive during one of these events is vital, Ralph said. 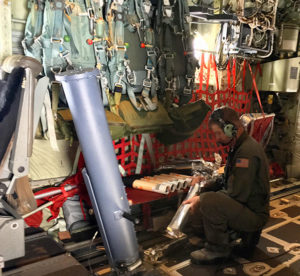 CMSgt. Rick Cumbo, a 53rd Weather Reconnaissance Squadron chief loadmaster, prepares a dropsonde before placing it into a launch tube as part of a research mission Feb. 11-24, 2016, to collect data from atmospheric rivers over the Pacific to improve West Coast weather forecasts. The Hurricane Hunters use a dropsonde, which is a parachute-borne cylindrical instrument that collects meteorological data as it descends.

The last El Nino event in the 1990s produced more rain than the California reservoir infrastructure could handle. To alleviate strain on the reservoirs, the water managers opened the dams and let the water out. The big problem occurred when the rains stopped and too much water was let out and then it didn’t rain again for years, he said.

The data collected from the Hurricane Hunter’s missions will allow scientists to determine how much water needs to be drained, Ralph said.

“The missions were an absolute 100 percent success,” Talbot said. “All sorties flew and collected in the areas needed, helped to paint the full picture for forecasts.”