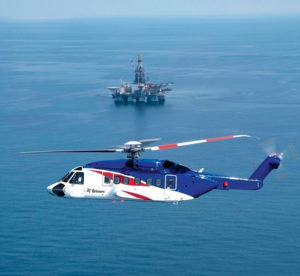 Bristow Helicopters Ltd. is an affiliate of Bristow Group Inc. Sikorsky is a Lockheed Martin company.

Bristow crews, with support from engineers, technicians and operations personnel, utilized nine Sikorsky S-92 aircraft to airlift 400 offshore workers safely from platforms in the Eldfisk and Valhall fields in extreme weather conditions, after a 360-foot-long barge set loose by stormy weather and high seas drifted toward the oil installations and threatened their operations.

The barge, which was being used to transport cargo, was returning to Norway from Tunisia when the tow line broke. Bristow’s mission was to evacuate offshore personnel away from the threatened platforms to other rigs in the area outside the danger area and to a safe onshore location as quickly as possible, then transport personnel back to their worksites in the following days. When concluded, Bristow transported nearly 800 workers on 40 flights over three days.

“On behalf of our crews around the world and especially the 49 employees involved in these evacuations, we are incredibly honored to be recognized for this operation,” said Jonathan Baliff, president and CEO Bristow Group. “Known for its reliability and advanced technology, the S-92 offered a variety of mission capabilities that were key to this Norway response and vital to the flexibility of our operations, even in the harshest of winter weather conditions.”

Sikorsky and Bristow have done business together for more than 40 years. The Bristow fleet currently features more than 160 aircraft of various types. Bristow currently has 75 S-92 aircraft in its consolidated fleet, which are operated in Europe Caspian, Africa, Asia Pacific and the Americas. Certified to meet the most stringent safety requirements around the world, the S-92 is one of the most successful helicopters in operation.

“Bringing people home everywhere, every time is the foundation of our mission at Sikorsky,” said Dan Schultz, President, Sikorsky, a Lockheed Martin Company. “We are honored that Bristow trusted the S-92 helicopter to perform these life-saving evacuations, and we applaud the crews for their bravery in performing the mission.”