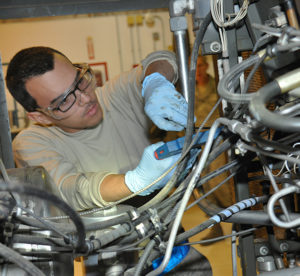 The flight maintains 93 different types of equipment including generators, heaters and hydraulic test stands valued at $32 million. The section also provides ground equipment maintenance support to six bases across the USCENTCOM AOR, which consists of 20 countries in Southwest Asia and Africa.

The unit’s motto is “without ground power, there is no air power.”

“We provide everything that an aircraft may need so maintenance can be performed such as generators, hydraulics, air conditioning…everything,” said SSgt. Kenneth Roman, 379th EMXS AGE Flight journeyman from Charlotte, N.C.

Roman is currently serving on his fourth deployment. He’s responsible for ensuring the accountability and serviceability of nearly 700 items including socket sets, drills and hammers. He said he loves his job.

“I like being able to identify problems on equipment and fix them,” Roman said. “With AGE, you kind of have to be a jack of all trades. You’re not doing the same thing every day; you work on one piece of equipment one day and you’ll likely work on something else another day.”

Roman first deployed as an AGE mechanic to Bagram Air Field, Afghanistan, in 2007. On that deployment, he learned just how important AGE mechanics are.

“About two months into the deployment, I met a Marine, and he thanked me for what I do,” Roman said. “I said, ‘I don’t really do that much; I’m just a mechanic.’ The Marine told me ‘You put that aircraft in the air, whether you think you do or not, you have a hand in that; if that plane was 30 seconds late yesterday, I would’ve been dead.’”

The Marine was referring to the F-15E Strike Eagle.

The AGE mechanics at AUAB inspect, service and maintain ground equipment such as generators, hydraulic-test stands and heaters. That equipment is used by maintenance personnel to ensure Al Udeid’s aircraft are mission ready.

The unit’s work supported more than 20,000 sorties in 2015 including historic accomplishments by the B-1B Lancer, which set rotational records for total ordnance dropped and the KC-135 Stratotanker, which flew more than 100,000 combat hours.

“Our job is important,” said A1C Gavin Baker, 379 EMXS AGE mechanic from Lancaster, Calif. “Each aircraft has specific needs. For example, if an aircraft needs to be connected to a generator, we must ensure that generator is operating at a specific voltage and frequency, otherwise it could severely damage the components on the aircraft.”

“An aircraft may need to test its hydraulic systems, so we supply the hydraulics test stands to support that function,” Baker added. “We ensure the fluid flows at a certain rate to ensure the hydraulics that move the wing tips to change the elevation of the aircraft aren’t being over-serviced.”

An oversight in this area could result in severe interior aircraft damage, Baker added.

“We have more than 100 people including members from the Air National Guard, Air Force Reserves and active duty force and we all come together here to perform the mission,” he said.

“When they set their boots on the ground here, their minds are focused on the mission,” Lausten added. “Sometimes it may seem like the odds are stacked against them. We’ll have equipment break and they will do what they have to, without complaining, and find a way to fix anything quickly and efficiently. Their ability to do that is phenomenal. This shop performs above and beyond all expectations.”