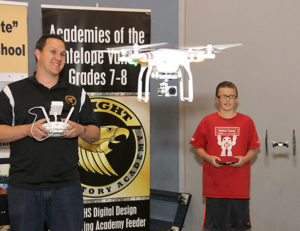 James Stockdale, a teacher at Pete Knight High School and his son, Cullen, 12, who attends Knight Preparatory Academy, fly quadcopters during a RoboSTEM Expo held at the Pioneer Center. Middle and high school students are now taking classes that were once only offered in colleges.

The expo was a gathering of STEM programs and robotics teams from across the Antelope Valley, where students and adults got some hands-on experience with flying drones, learning about robotics, and how to strategize and play chess.

If CNC lasers, routers, Raspberry Pi, Python, Scratch, MaKey MaKey and Arduino sound strange, don’t ask a college student or engineer about them, ask a middle school student to clue you in.

“An event like this helps kids to think creatively, innovatively, to problem solve and think outside of the box,” explained James Stockdale, who teaches digital electronics, aerospace engineering, biology and chemistry- “depending on the year,” at Pete Knight High School and the Knight Preparatory Academy.

“It’s really easy as a teacher to stand in front of a class and lecture and teach kids to fill in bubbles — it’s really hard to teach kids how to think, how to design, how to solve problems, how to trouble shoot- and let them know it is ok to fail. If you can teach them these skills, they will be successful at life,” says Stockdale.

The Digital Design and Engineering academy at Knight high school has been going strong for seven years. Last year students built an electric car, currently they are building an empennage (tail) for a Sonex airplane, next year they will build the fuselage and after that, the wings, powerplant, and in four years they will have a fully functional two-seater airplane.

Last year students placed third in Australia during an international quadcopter competition. Other projects included problem solving to make a solar pump work. Three groups of students even traveled to Nicaragua to install solar arrays in remote villages in Nicaragua.

“These are really unique things that our kids do and now we are a part of the education in Nicaragua and they are a part of us.” The classes stay in touch by skype and the learning process has been great for the students, knowing that they are making a huge difference in other people’s lives. “We are not feeding them fish, we are teaching them to fish,” said Stockdale.

Students also learn programming and coding in Scratch and C+ using MaKey MaKey in seventh and eighth grade and learn to design using Raspberry Pi and Arduino in high school. “We really stretch them and do what we can to challenge the kids.”

Not considered typical education covered in most school budgets, students raise money by washing cars, garage sales etc. and could not have such an education without other supporters such as: PPG Aerospace, High Desert Hobby Shop, Northrop Grumman and Lockheed Martin.

“Our supporters have been awesome,” said Stockdale. The world is changing along with employment opportunities and requirements, and STEM students are leading the way.

Stockdale’s son, Cullen, is in the Knight Preparatory Academy in the 7th grade and hopes to be a teacher someday. “I don’t quite know exactly what I want to teach but I do want to be a teacher,” he said as he piloted a small quadcopter.