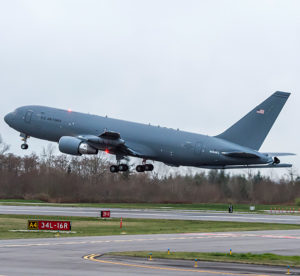 Boeing’s second KC-46 tanker (EMD-4) takes off from Paine Field in Everett on its first flight. The tanker landed later at Boeing Field in Seattle and will initially be used to test mission system avionics and exterior lighting.

“Adding a second tanker to the flight test program is very important as we move into the next phase of testing,” said Col. John Newberry, U.S. Air Force KC-46 System program manager. “The team will initially use the aircraft to test mission system avionics and exterior lighting. Later, it will share the air refueling effort with the first KC-46.”

The Boeing team now will conduct a post-flight inspection and calibrate instrumentation prior to the next series of flights. As part of the overall flight test program, the KC-46 will demonstrate it can refuel 18 different aircraft. The second tanker will help share the test load and receiver certification.

Boeing was awarded a contract in 2011 to design and develop the U.S. Air Force’s next-generation tanker aircraft and is building four test aircraft – two are currently configured as 767-2Cs and two as KC-46A tankers.

The KC-46A is a multirole tanker Boeing is building for the U.S. Air Force that can refuel all allied and coalition military aircraft compatible with international aerial refueling procedures and can carry passengers, cargo and patients. Overall, Boeing plans to build 179 KC-46 aircraft for the U.S. Air Force.