Future “astronauts” and hundreds of guests came from around the globe to celebrate with Virgin Galactic and The Spaceship Company as they unveiled “Unity” the second SpaceShipTwo (SSII) during a ceremony at the Mojave Air and Space Port Feb 19.

Curtains opened and excitement grew as Sir Richard Branson emerged on top of a Land Rover with the beautiful SSII in tow. The ceremony took place in FAITH (Final Assembly Integration Test Hangar), the home of manufacturing and testing for the human space flight program.

After parking the ship, Branson circled the room and shook hands with guests and employees, and later, stayed hours after the pre-scheduled time to chat with fans and the media. “He is always so gracious and real,” whispered a reporter from the BBC.

With a little help from her grandfather, Richard Branson, and her parents, Sam and Isabella Branson, Eva Deia celebrated her first birthday by christening the new ship with a bottle of milk.

“I don’t know how we are ever going to top this birthday,” said Isabella, “the sad thing is, she won’t even remember this day!” Guests joined English soprano and future space traveler, Sarah Brightman, in singing “Happy Birthday.”

The event also included video congratulations from Nobel Peace Prize winner, Malala Yousafzai, who was shot in the head by the Taliban for promoting education, Professor Stephen Hawking, who is regarded as one of the most brilliant theoretical physicists since Einstein, and Enrico Palerno, one of the founding members and vice president of operations of TSC. 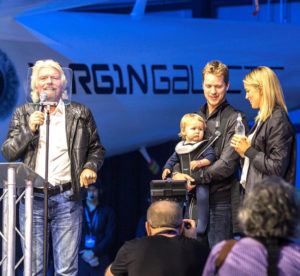 Richard Branson celebrates the unveiling of “Unity” with his son, Sam, daughter-in-law, Isabella, and granddaughter Eva Deia. Also celebrating her first birthday, Eva Deia christened the ship with the breaking of a milk bottle.

“We felt strongly that we should somehow make sure that Stephen remained a permanent part of Unity’s story, because so much of what he stands for resonates with what we at Virgin Galactic aspire to be, so the Galactic Girl on the side of our proud Spaceship Unity now carries a banner using an image of Stephen’s eye,” explained Branson.

“Hardly a day goes by when I don’t think of Mike and of his family,” said Doug Shane, president of TSC and former colleague of Alsbury at Scaled Composites.

Since the beginning of time, man has taken great risk and made sacrifices to explore the unknown- space is no different.

“We would always remember the accident but we would not be defined by it,” said George Whitesides, CEO of Virgin Galactic, speaking of the support, prayers and encouragement from Albury’s family, friends, coworkers and strangers who reached out and encouraged the team to continue with the mission- a mission Alsbury passionately believed in. Whitesides said that his hope is to open space to all walks of life- not only to pilots and engineers, but artists and everyone.

Investigations of the accident revealed that Alsbury prematurely unlocked the “feather mechanism” at unsafe speeds. The mechanism raises SSII twin tail booms perpendicular to the fuselage, creating the drag necessary to safely slow the aircraft as it descends while keeping it upright. Changes have been made so this mistake can never be repeated.

“We’re going to constantly evolve our design, our operating philosophy and procedures so that we’re always learning and always making it better,” said Michael Moses, senior vice president of operations for VG. Accomplishing a lot of the flight test objectives with the first SSII, Moses said they are ahead of the game with the second SSII. No dates are promised for the first flight — “This is flight test, we will fly when we are ready.”

Christine and Jim Straube who started out under a shade tree painting trinkets for tourists in Hawaii, are proud to say their company painted Unity.

“We are so privileged and honored to be part of this project; she really is beautiful, isn’t she?” remarked Christine as she admired the flawless art before her. 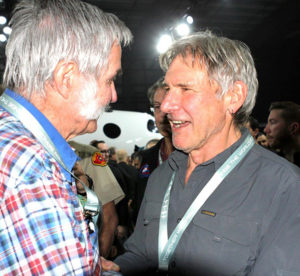 Legendary aircraft designer and founder of Scaled Composites, Burt Rutan, has a laugh with Harrison Ford during the unveiling of “Unity” at the Mojave Air and Space Port.

Scientist and chemist, Lina Borozdina, said she is one of the original 10 members who bought a ticket 11 years ago, when civilian space travel was just an idea.

She first heard of the dream in 2005 when it was advertised on the Super Bowl with links provided. “I had to mortgage my house to buy a dream of a lifetime.” Born in the Soviet Union, the self-proclaimed science fiction nerd dreamt of space as a very little girl. “I now feel that this is truly a reality.”

Heartbroken over the loss of Alsbury, his family and possibly the mission, Borozdina said the spaceship community around the world pulled together, as a family often does in any tragedy.

“Most of us stuck together, we believe in the mission — somebody had to start it, we know it is experimental and there are risks.

I’m proud to be a part of it. I would not hesitate for one second to fly in this ship. As Isabella mentioned earlier, twenty years from now kids will say, ‘let’s go on a holiday to the moon,’ and I will have been a part of that.”

VG pilot Todd Ericson said that Unity is a perfect name for the new spaceship. “The spaceship represents all the blood, sweat and tears of all the people who worked so hard to create her,” said Ericson. “After a tragic year, it’s so cool to see everyone come together and celebrate.” 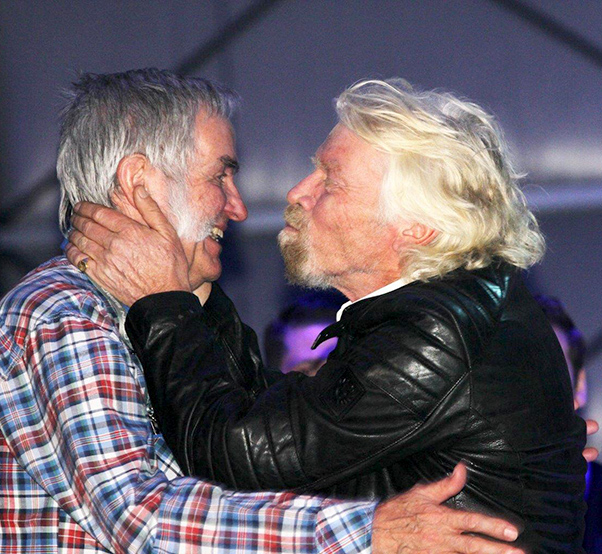 Burt Rutan gets a smooch from Sir Richard Branson. The last time Branson visited Mojave he said he had tears of sadness, but today they were tears of joy. 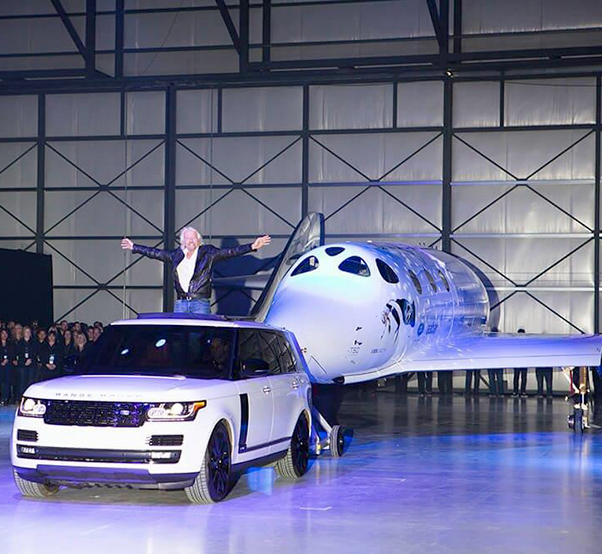 Sir Richard Branson escorts VSS Unity during an unveiling ceremony at the Mojave Air and Space Port. Unity is the first aircraft built by The Spaceship Company. Tourists will ride Unity or a similar craft to space, taking off from Space Port America in New Mexico.