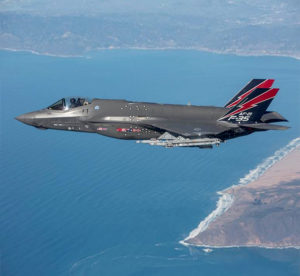 AF-1, of the 461st Flight Test Squadron at Edwards Air Force Base, California, became the first F-35 to fire the Air Intercept Missile-9X missile Jan. 12, 2016. Store separation testing using AIM-9X Sidewinder has been conducted in the 4-foot transonic wind tunnel at AEDC, with one the most recent tests being in 2012. Data from these tests helped prepare the F-35 for its recent launch of the AIM-9X.

Data from these tests helped prepare the F-35 Lightning for its first successful launch of the AIM-9X.

On Jan. 12, an F-35 from the 461st Flight Test Squadron released an AIM-9X over the Pacific Sea Test Range at an altitude of 6,000 feet. The AIM-9X is an advanced infrared missile and the newest of the Sidewinder family of short-range air-to-air missiles carried on a wide range of fighter jets.

During testing in Tunnel 4T at AEDC in 2008, the AIM-9X was one of several stores released from the F-35 Joint Strike Fighter aircraft Short Takeoff and Vertical Landing and Carrier variants. Testing observed separation characteristics of these stores from the weapons bay and weapons pylons of the aircraft model. Separation data were acquired for numerous aircraft configurations and model angles of attack at flight speeds up to Mach number 1.6.

In 2012, additional tests investigating separation characteristics of the Conventional Takeoff and Landing and Carrier variants of the F-35 were completed in Tunnel 4T. Captive loads data were acquired for the AIM-9X at several down-rail positions from aircraft wing stations.

In addition to the Lightning, other fighter aircraft have undergone store separation testing at AEDC using the AIM-9X. In the early 2000s, a 1/15-scale model of the F-16 and the AIM-9X was tested. AEDC personnel have also accomplished AIM-9X separation testing from the F-15C/D/E, F/A-18E/F, and the F-22 aircraft in Tunnels 4T and 16T.

According to an Air Force press release, the inaugural shot of the AIM-9X Jan. 12 paves the way for the F-35 to utilize the weapon’s high off-boresight and targeting capabilities, increasing lethality in the visual arena.