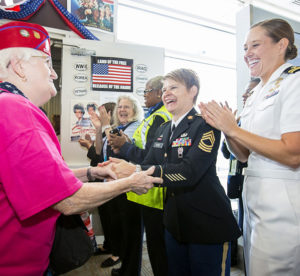 As more veterans of World War II, Korea and Vietnam travel to Washington, D.C., as part of the Honor Flight program, more volunteers are needed to escort them.

For over a decade, Honor Flights have transported thousands of World War II, Korean War and Vietnam War veterans who live throughout the U.S. to Washington, D.C. During these trips, veterans visit the memorials of their respective wars, among a long list of other national monuments.

These veterans are flown to D.C. for a time of remembrance and reflection at commemorative, nationally-recognized structures of high importance, memorials built to honor those who served, fought and perished. But the logistics surrounding these significant visits require heavy volunteer manpower: Honor Flight airport greeters and guardians.

“I’ve been volunteering for a couple of years,” said Daisy May Morgan, a retired U.S. Navy senior chief petty officer, who was last stationed at the Pentagon. “I volunteer my time out of my appreciation for our nation’s pioneers and the shoulders that we are currently standing on.”

Morgan served as an Honor Flight airport greeter during the arrival of the oldest World War II vet, 110-year-old Frank Levingston, who arrived in D.C. by way of an Honor Flight to Ronald Reagan Washington National Airport in December 2015. Levingston’s visit was featured in the Pentagram; his schedule included a visit to Arlington National Cemetery, the Tomb of the Unknown Soldier and the National World War II Memorial.

Another volunteer who assisted during Levingston’s monumental trip was U.S. Army Spc. Daniel Yeadon, social media and outreach specialist with 4th Battalion, 3d U.S. Infantry Regiment (The Old Guard), at Joint Base Myer-Henderson Hall. Yeadon has served as a volunteer guardian (escort) to half a dozen visiting veterans over the last 12 months and sums up his volunteer experience in one word: indescribable.

“There’s not another volunteer experience like volunteering with a veteran on an Honor Flight,” said Yeadon. “It’s an experience that’s filled with all these emotions from the time these veterans land until the time they return back home. By the end of the experience you know about a person’s military career: their experiences in war and how they felt losing friends when they were serving in battle. 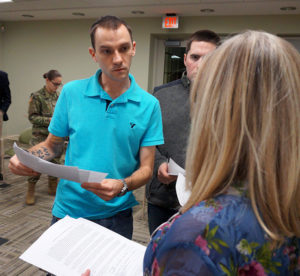 “The stories you’ll hear and the tears they shed in front of you are proof these men and women have actually seen war,” he said. “And to be able to visit monuments with these men and women who have been all over the world, but have never been to the monuments that were built for them is just priceless.”

“These men and women have requested to go on these flights for a reason,” said Surratt. “The last person I escorted was a 101-year-old man. He came to D.C. for the same reason others had come before him – for closure.”

Honor Flight guardian assignments soon to increase
The next round of Honor Flight arrivals will begin flying into D.C.-area airports in April, May and June, according to Laura Robertson, guardian coordinator for Ronald Reagan Washington National Airport. And she’s being proactive about avoiding a potential shortage of greeters and guardians this spring and summer.

“Honor Flights have evolved,” said Robertson. “Every veteran on an Honor Flight needs a guardian. It used to be every three veterans needed a guardian, now the norm is every veteran will have their own individual guardian. In that case they are utilizing more D.C.-based guardians.”
“And we’re heading into the time of year when you’re going to see Honor Flights arrive just about every other weekend at DCA [Ronald Reagan Washington National Airport] and Washington Dulles International Airport,” Surratt said.

On March 1, in an effort to reach a larger pool of volunteer guardians, Robertson held a two-hour Honor Flight Guardian Training seminar at the Arlington Public Library. The event was attended by military-affiliated personnel who work at installations in northern Virginia. The hope was to reach a pool of volunteers who were dependable, physically fit and relatable, she said. 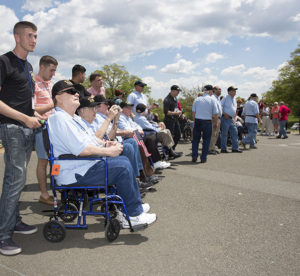 From left, Spec. Dan Yeadon and Honor Flight attendee retired U.S. Navy Petty Officer 1st Class Tommie Lee from Austin, Texas, view the U.S. Marine Corps War Memorial while waiting to take a group photo in Arlington, Va., May 2, 2015. Yeadon, a Soldier with the 3d U.S. Infantry Regiment (The Old Guard) on Joint Base Myer-Henderson Hall, is one of dozens of local service members who serve as guardians — volunteers who serve as escorts for the hundreds of World War II, Korean War and Vietnam War veterans who visit Washington D.C. as part of the Honor Flight program.

“Our primary mission is to watch over the safety of our veteran, and that includes the emotional well-being, their physical and mental health,” Robertson said. “Typically our volunteer guardians need to be dependable and fit enough to walk between three to five miles a day, because these trips pack in what some people do in a week. But the emotional well-being is just as important. This should be a fulfilling day for our veterans, and our guardians need to initiate conversation in a respectful way.”

The seminar covered general safety rules, as well as medical concerns, the importance of hydration and the importance of capturing the guardians’ experience with his or her designated veteran through pictures, either by cell phone or digital camera.

“It’s important to think about photographs,” Robertson said. “Serving as a guardian should be seen as a memorable honor and a privilege.”
Attendees were given a lot of training material to review and provided with a medical information form and a legal waiver.

“I’m building a pool of eligible guardians, so the next time I get a request for guardians they will be among the people who are notified,” Robertson said. “But I understand that everyone has their own gifts, limitations and thresholds.”

“You need to be able to empathize, which is why service-connected volunteers are so important,” Yeadon added.

“Volunteers should understand that you’re helping them [Honor Flight veterans] tell their story – and it could be a two day event,” Surratt said. “It’s a big deal that’s capped off with a return full of claps and ovations, and the highly anticipated heroes’ welcome that awaits them when they arrive back to the airports from where they originally came. Thousands of people are just waiting for them to come home. This kind of volunteer experience is both memorable and equally amazing.”