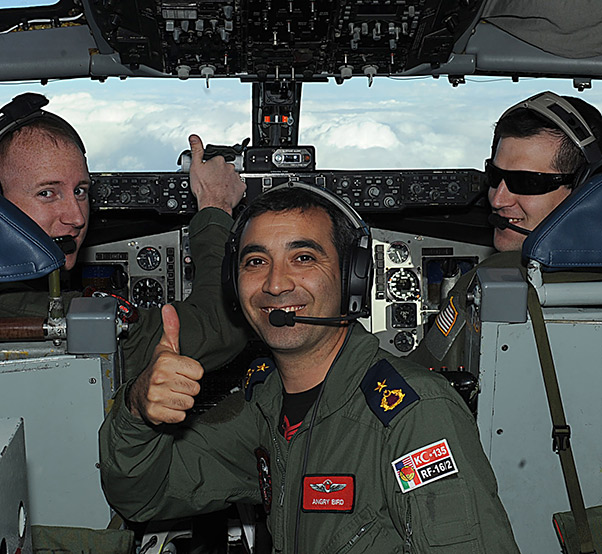 To better understand how each nation completes the vital air refueling mission, the U.S. Air Force and Turkish air force flew KC-135 Stratotankers together in formation for the first time March 8 over the Nevada Test and Training Range, northeast of Nellis Air Force Base.

“The Turkish air force KC-135 aircrew, maintenance and accompanying support personnel are the utmost professionals and are highly capable,” Puchalla said. “They have been an asset to Red Flag 16-2’s Tanker Task Force, and I have no doubts about their ability to fuel the fight of the future. I have witnessed nothing but the best during my flights aboard their Stratotanker.”

The exchange during the exercise allowed both countries’ tanker units to see their differences and similarities in how their tanker crews perform their missions of sustaining the fight and extending the global reach of their nations.

“I am very thankful we had the opportunity to make history with this flight between our aircraft and our nations,” Kus said. “This Red Flag flight will be remembered as an example of the cooperation between allies.”

The primary mission of Red Flag is to provide advanced, realistic and relevant training for aircrews and support personnel to think in a contested, degraded and operationally limited environment. Having coalition forces fly together during an exercise prepares them for future real-world missions.