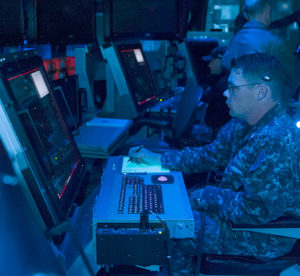 “Normally we don’t have any flight operations we can simulate while we’re in port,” said CATCC Leading Chief Petty Officer Chief Air Traffic Controller Keith Thompson. “Now that we have this simulator, we can come here and simulate flight operations any given day.”

The new software was installed recently during Carl Vinson’s chief of naval operations planned incremental availability period and provides the embarked air traffic controllers a mission-ready edge over others in the fleet.

“Right now, with this new simulator, I can sit a new air traffic controller in front of the system and he can run simulators,” said Thompson. “That way, when we experience live [air] traffic, he’ll be proficient because he’s seen it, he’s done it, and he’s familiar with the phraseology we use during the real thing.” 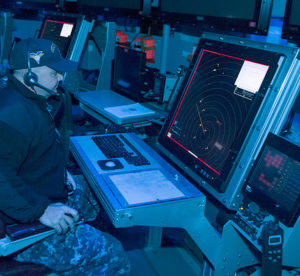 Carl Vinson Commanding Officer Capt. Karl Thomas attended the unveiling event to learn more about the program and observe the air traffic controllers replicating their flight operations rhythm despite the fact that the ship is currently in port.

“It really strengthens our team,” said CATCC Leading Petty Officer Air Traffic Controller 1st Class David Shoemaker. “If you have more people who are fully qualified to handle live traffic, you have a lot more experience and confidence in the room, should any emergency arise during flight operations.”

With the simulator at their disposal, the CATCC crew has the necessary tools to enhance air traffic control readiness, further preparing the crew for upcoming flight operations certifications.

“This is one of the most impactful improvements in carrier air traffic control in a long time,” said Thompson. “Once this rolls out to the rest of the fleet, it will increase the amount of training, experience, and flexibility available to each of the Navy’s carrier air traffic control teams.”
Carl Vinson is currently undergoing a CNO planned incremental availability period in preparation for future sea operations.