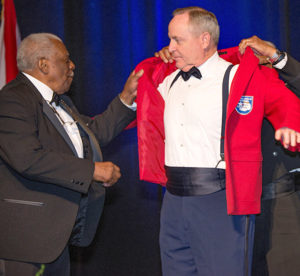 Air Force Chief of Staff Gen. Mark A. Welsh III is inducted as an honorary Tuskegee Airman during the Tuskegee Airmen Foundation’s 75th anniversary commemoration in Montgomery, Ala., March 22, 2016.

Air Force Chief of Staff Gen. Mark A. Welsh III was among the guests.

Only 40 miles from where the U.S. Army Air Corps trained the first African American military aviation group in U.S. history, retired Brig. Gen. Leon A. Johnson presented Welsh with a Tuskegee red jacket, making him an honorary member of the Tuskegee Airmen. The red jacket represents the distinctive red that pilots and maintainers painted on the tails of their P-47 Thunderbolts and P-51 Mustangs in the 332nd Fighter Group.

“We’re taking this action because (Welsh) has been an active proponent and supporter of getting the message about the legacy and heritage of the Tuskegee Airmen out to the members of your Air Force and the strength that comes from diversity,” Johnson said.

Induction as an honorary member of Tuskegee Airmen Inc. is a reflection of a person’s support of the overall goals of the organization, said Marv Abrams, the central region president of the group.

Those goals, according to Abrams, not only include preserving the heritage and legacy of the original Tuskegee Airmen, but introducing youth to aviation and science, technology, engineering and math (STEM) opportunities through youth programs.

Theodore “Ted” Lumpkin, one of the 10 original Tuskegee Airmen who attended, said he was happy to see Welsh help preserve that legacy for today’s youth. 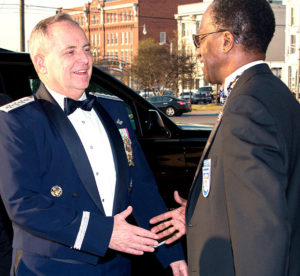 Retired Brig. Gen. Leon Johnson, right, greets Air Force Chief of Staff Mark A. Welsh III in downtown Montgomery, Ala., March 22, 2016, at the start of the Tuskegee Airmen Foundation’s 75th anniversary commemoration. Johnson is the foundation’s board chair and the national president of Tuskegee Airmen Inc. Welsh was inducted as an honorary member during the event.

“When you see important individuals wanting to be and feeling honored to be an honorary member, it’s very satisfying and it gives you the indication that we’re going to continue to exist … and hopefully inspire youngsters to emulate what we did,” Lumpkin said.

“To say that this evening is an honor for me … might be the biggest single understatement of my life,” Welsh said with notable emotion in front of the group of nearly 200 after Johnson helped him replace his uniform coat with the honorary red coat.

“It is such an incredible privilege just to be here to celebrate the 75th anniversary of the lighting of this eternal flame that was lit at Chanute Field in Illinois in 1941, and is still burning brightly in the eyes of the 10 original Tuskegee Airmen sitting here tonight,” he continued. “I’m still unable to wrap my mind around the fact you’re allowing me to wear a red jacket. I just don’t feel worthy.”

To learn more about the history of the Tuskegee Airmen and the youth outreach programs, visit http://tuskegeeairmen.org/.