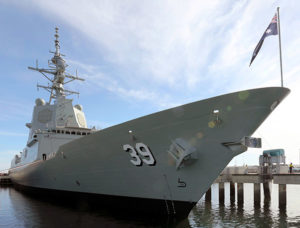 Lockheed Martin anticipated the need for the future Australian domestic sustainment of Aegis on AWD several years prior to this event.  Lockheed Martin used internal funds to develop specialist skills in the Aegis Combat System for our Australian AWD Program workforce.  “We strengthened the AWD test team which now includes experienced Lockheed Martin engineers and technicians from both Australia and the U.S. to conduct the Aegis combat systems integration,” Milligan added.

The Hobart-class destroyers are being built under Australia’s SEA 4000 program, which will ultimately deliver three advanced multirole ships. These ships will be Australia’s first ships to be equipped with Lockheed Martin’s Aegis Weapon System including the SPY-1D(V) radar. When paired with the MK 41 Vertical Launching System, Aegis is capable of delivering missiles for every mission and threat environment in naval warfare. The RAN has received the Lockheed Martin Aegis Baseline 8 configuration, which integrates commercial-off-the-shelf technology and open architecture into the combat system.

“This milestone is a significant step towards an increase in the Royal Australian Navy’s maritime security capabilities through the seamless integration of the Aegis combat system to defend against advanced air, surface and subsurface threats,” said Commodore Craig Bourke, CSC, RAN Program Manager Air Warfare Destroyer “With more than 100 Aegis-equipped ships deployed worldwide, Australia is joining a family of allied nations that continues to push the boundaries of innovation with adaptable and affordable capabilities that meet the warfighter’s multi-mission needs.”

Lockheed Martin is the Aegis Combat Systems Integrator and engineering agent for the U.S. Navy Aegis destroyers and cruisers, Australian Air Warfare Destroyers, as well as a range of other international customers for both new construction and modernizations.  Lockheed Martin also provides the combat system engineering, integration and test for the U.S. Navy’s future frigate and Freedom class Littoral Combat Ship programs.

With more than 40 years of significant investment by the U.S. Navy and its allies, the Aegis Combat System is used globally by five navies, across seven ship classes. Lockheed Martin is the trusted Aegis Combat Systems Integration partner to governments around the world, enabling mission ready, combat capable ships affordably and timely to the fleet.